You are at:Home»Opinion»Why Facebook, Apple, Amazon, Netflix, and Google are daytrader’s favorites

We have written a lot recently about trading cryptocurrencies, but it turns out that when the crypto markets lack any trading volume to create big price swings, the more traditional instruments – stocks – are also very attractive. Why not trade the most exciting companies, such as Facebook, Apple, Amazon Netflix, and Google (that is the Alphabet) – so-called “FAANG”.

There’s plenty of room for reactive trading. Many of you are direct users of these companies services. You hear about them in the news and have your own opinion about the new products, strategies, or the last public affairs crisis they came through. It’s all in the news.

As with any other assets the big advantage of CFD trading is the ability to take short or long positions with ease. You don’t have to act as Warren Buffett, and only look for the companies you believe in long-term. You don’t have to wait for the right moment to enter a market. You can do it at the highest price, at the peak of the bubble.

Earlier this week the “FAANG” stock dropped heavily. The five stocks lost more than $1 trillion since the recent highs. The tech giants lost much of their value in October, and November so far proved to be even more volatile. 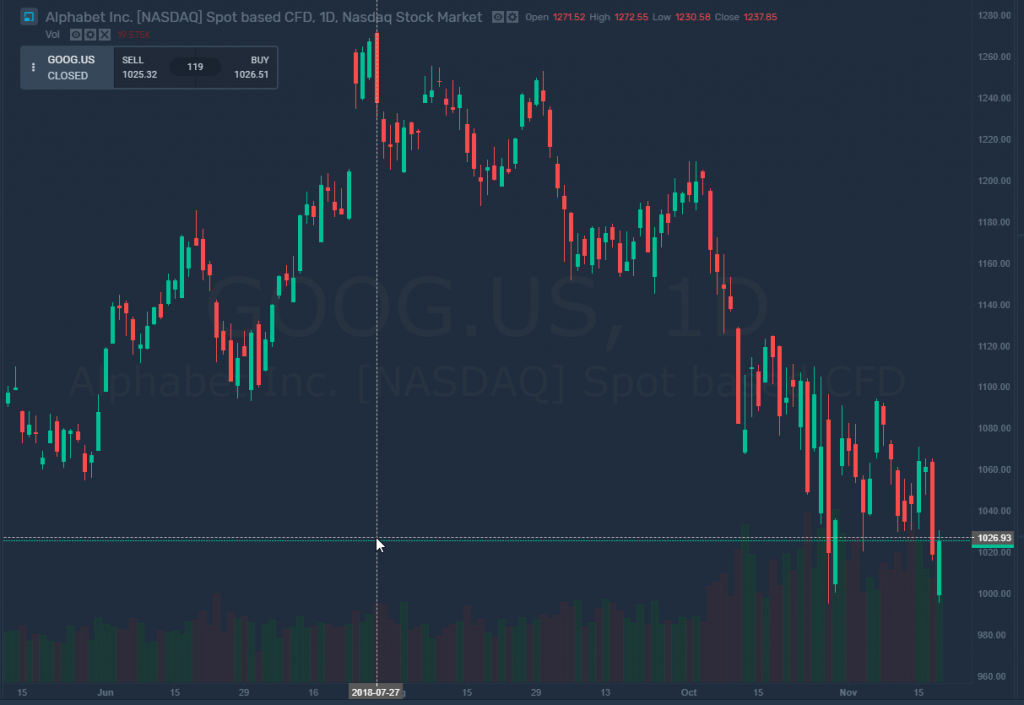 Alphabet Inc. has lost a lot in the last months.

Will they bounce back? It’s difficult to say since each company has its own problems and possible solutions. Each one of them is disrupting markets causing anger of some social groups, and some like Facebook and Google are directly involved in politics.

Large fundamental investors buying this kind of stock are looking far ahead into the future. All this should bring a lot of daily volatility. Probably the chaos will continue giving CFD traders endless opportunities to profit.

Some analysts point that during the stable growth that took place in the first 3Q of 2018 were, in fact, an anomaly.

“This market has just gone back to normal. We’ve gotten used to an abnormally calm market, with low volatility, but that’s just not reality,” said Dan Wiener, cofounder of Adviser Investments. “We were spoiled”, he added.

FAANG stocks are increasingly attractive for day traders. They have one big advantage over cryptocurrencies – much more liquidity. Traditional investors and big capital are still scared of putting large sums into crypto. Big events, such as the recent Bitcoin Cash controversy, often cause market stagnation with trading volumes dropping almost to zero.
If you were thinking about trading FAANG, give it a try today with SimpleFX Black Friday promo, where we are cutting the spreads by %50 on all trades. Log in to SimpleFX WebTrader for further details.
Amazon Apple FAANG Facebook featured Google Netflix stocks
Share Twitter Facebook Google+ Pinterest LinkedIn Tumblr Email