BTC Is Above $21k. What Causes Bitcoin To Rise? Bitcoin reaches above $21k for the first time since the collapse of FTX. But what causes Bitcoin to rise? It could be increased demand from institutional investors, more favorable regulations, or the growth of decentralized finance (DeFi). Whatever the cause, Bitcoin has been on a steady rise and doesn’t look like it will slow down anytime soon.

In the recent text, “2022 Crypto Review: What Happened and What Will Happen in 2023?” I wrote that, according to some experts, the bullish market on Bitcoin is inevitable. As we look at the current BTC rally to the top, it’s hard to disagree with them. Concerns about a recession in the cryptocurrency market also seem premature, as I argued in the article “Cryptocurrency Future: 6 Reasons Why It Is Secured“. But what is driving Bitcoin’s rise, and why is it so spectacular?

The rally in the Bitcoin market can be attributed to a few key factors:

So what causes Bitcoin to rise?

The long-term sentiment for Bitcoin has turned bullish as it shows its biggest weekly percentage gain in two years. This indicates that investors are confident in the latest bull revival of the crypto market. Expectations for Bitcoin’s price over the next six months have turned positive, as the 180-day call-put skew has gone positive for the first time since the beginning of 2021. This means bullish call options expiring in six months are more expensive than bearish put options. This is a positive sign for the crypto market and indicates that investors are optimistic about the future of Bitcoin.

3. Altcoins Sprint But Yet To Join The Leader

Altcoins have been making huge gains over the last two weeks, but many of them have yet to reach their pre-FTX’s collapse highs. Binance Coin (BNB) and Cardano (ADA) are two examples of altcoins that have seen significant growth recently but are still trading below their previous all-time highs. Despite this, both Binance Coin and Cardano have vital ecosystems and potential for future growth, making them attractive options for investors. 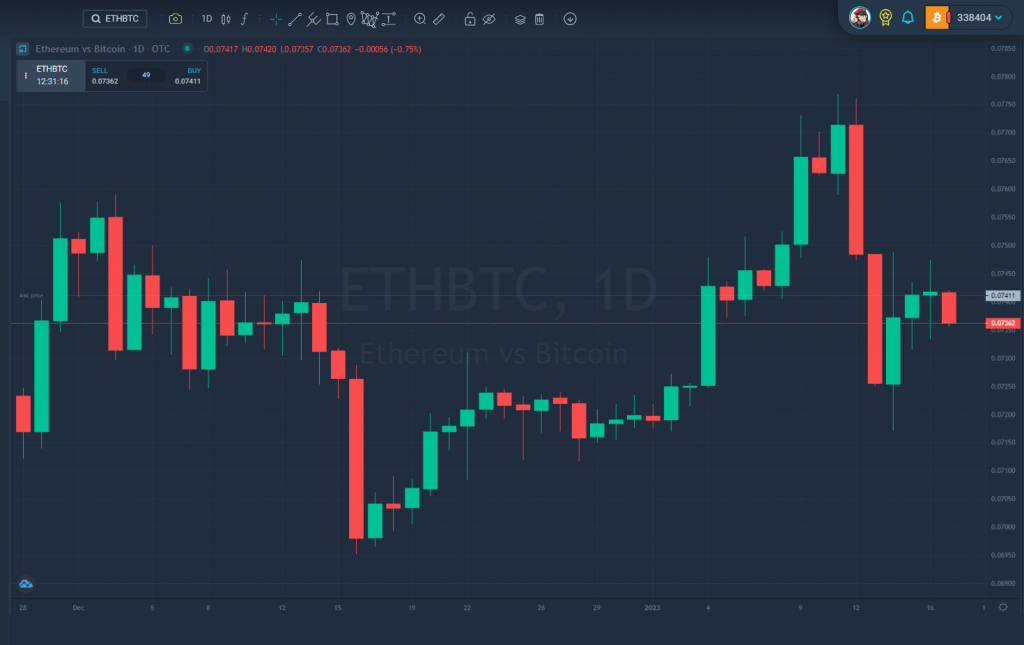 Ethereum (ETH) is trailing behind Bitcoin (BTC) in reaching pre-FTX highs, despite a 7% pump on Saturday. This is likely due to a combination of factors. Firstly, Ethereum has historically been more volatile and subject to more significant price swings than Bitcoin. It means it may be more affected by market fluctuations.

Ethereum may need to be better established and more widely adopted for its market capitalization to become larger than Bitcoin’s. Additionally, the strong sell wall pitched at US$1,560 could be an obstacle for the bears. However, with Ethereum currently changing hands at US$1,540 and needing another 8% to surpass pre-FTX levels, it is certainly possible, given the recent substantial daily gains. 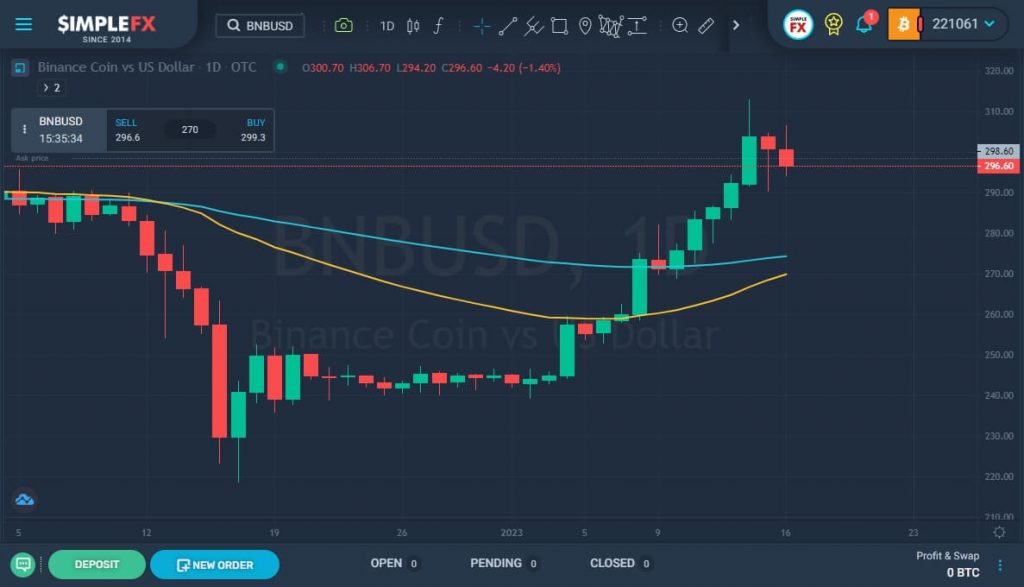 The Binance Coin (BNB) has seen a significant gain of 24.4% over the last two weeks. However, it still is trading below $300, which is way lower than the local high of $396.50 in November. Despite this, Binance Coin’s ecosystem still has the potential to grow. Binance Coin is the native token of the Binance exchange. It is used to pay for various fees on the platform, such as trading, withdrawal, and listing fees. As the Binance exchange continues to grow and expand, the demand for Binance Coin is likely to increase, which will, in turn, drive up its price.

Binance has been actively developing and launching new products and services, such as the Binance Launchpad, a platform for launching new tokens and projects, and the Binance Cloud, a solution for businesses and developers to launch their cryptocurrency exchanges. These developments are expected to further increase the utility and adoption of Binance Coin. They may contribute to its future price growth. 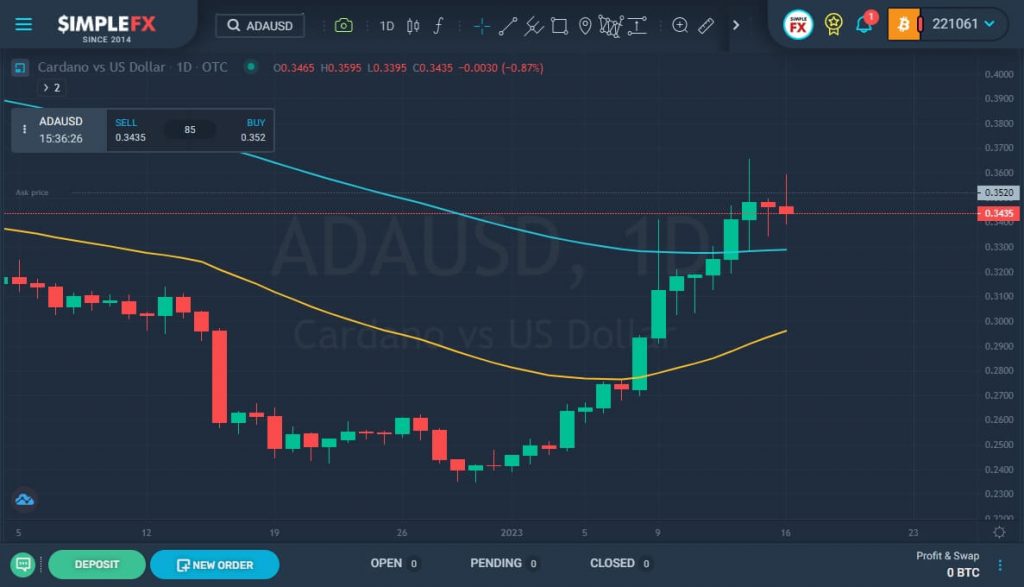 The Cardano (ADA) cryptocurrency has seen recent success, trading with SimpleFX. It has reached a descending resistance line in place since August 2022, which may cause a rejection. However, the Cardano news front has been positive with increased activity in the blockchain platform. The Decentralized Finance (DeFi) in the Cardano blockchain reached a two-month-high total value locked (TVL).

Since the beginning of the year, the TVL has surged by 40%, although it is still 79% below its all-time highs. The Cardano foundation announced that it would be attending the World Economic Forum in Davos, organizing the panel “Blockchain for Good.” It is a positive sign of the foundation’s efforts to increase the adoption and use of the Cardano blockchain.

The foundation’s efforts and increasing activity in the DeFi space on the Cardano blockchain are positive indicators of the future growth and success of the Cardano cryptocurrency.

4. Is The Crypto Winter Already Over? What Causes Bitcoin To Rise?

Yet, the crypto market was able to bounce back remarkably. The price of Bitcoin rose steadily in the following months, with some estimating that the currency had more than quadrupled in value since the crash. This was a significant sign of the resilience of the digital asset and a testament to the underlying technology and its ability to withstand market turbulence. But what causes Bitcoin to rise? The underlying technology of the cryptocurrency and the increasing demand from investors are significant factors driving the rise of Bitcoin. People worldwide consider digital technology a secure and reliable way to store and trade value. Bitcoin has become the go-to asset for many investors. Increased institutional and corporate adoption of Bitcoin is also driving its price up as more and more companies are investing in the currency and using it for their transactions.

Read also: How To Create a Cryptocurrency Trading Plan?

There are several arguments against Bitcoin already being in a bull market:

6. What Causes Bitcoin To Rise: A Conclusion

What causes Bitcoin to rise is still largely a matter of debate. However, some main factors driving the current surge include institutional investor interest, increased demand for digital assets due to macroeconomic uncertainty, and a general trend toward greater acceptance of digital currencies.

The lack of trading volume at higher prices indicates that the market may need help sustaining upward momentum. Additionally, the crypto industry is facing significant headwinds, such as regulatory uncertainty, that could further dampen the bullish sentiment. Finally, overbought indicators suggest that the market may be getting overstretched, and a correction may be in order.

Let me note that the rally has also been driven by positive sentiment, institutional interest, and regulatory developments. Thus that suggests that there may be more room for growth. Given these conflicting signals, it may be the last chance for bulls to buy Bitcoin before a potential retracement. On the other hand, bears may see this as an opportunity to short a retracement rally.