Tesla Sells Its Bitcoins Despite Elon’s Promises to Hodl Tesla to the moon, Source: Wikimedia.

Elon Musk has been all over the news recently. First, he decided not to buy Twitter after the stock prices collapsed. His changing his mind caused the Twitter sell-off but may become more costly for the Tesla founder in the long run, as the company has already had some success in the court battle.

Aside from his private affairs and having children with coworkers, Tesla is a spring of good news that never runs out.

But there is some unfortunate information for Tesla Inc. stock owners: even though the stock price went high, the sale margin went down. Also, Tesla Inc. is aware of production problems and bad logistics in current wartime, so this jump could be just for a little while since, in general, Tesla papers were going with the market.

Elon Sells Despite Promising Not to?

Another piece of news is Tesla selling 75% of its BTC holdings. They decided to convert BTC to fiat USD. The move into fiat added almost 965 million USD to Tesla’s balance sheet. It means they still hold 218 million USD in BTC. Tesla sold BTC once already. Some time ago, they accepted it as payment for cars, but later Elon criticized it for being bad for the climate in favor of Dogecoin.

But at the media info from Musk, he said that selling BTC by Tesla Inc shouldn’t be seen as any kind of judgment on it. They are simply selling as “the Covid emerges again,” and as Elon said, they want to have more cache in these uncertain times. 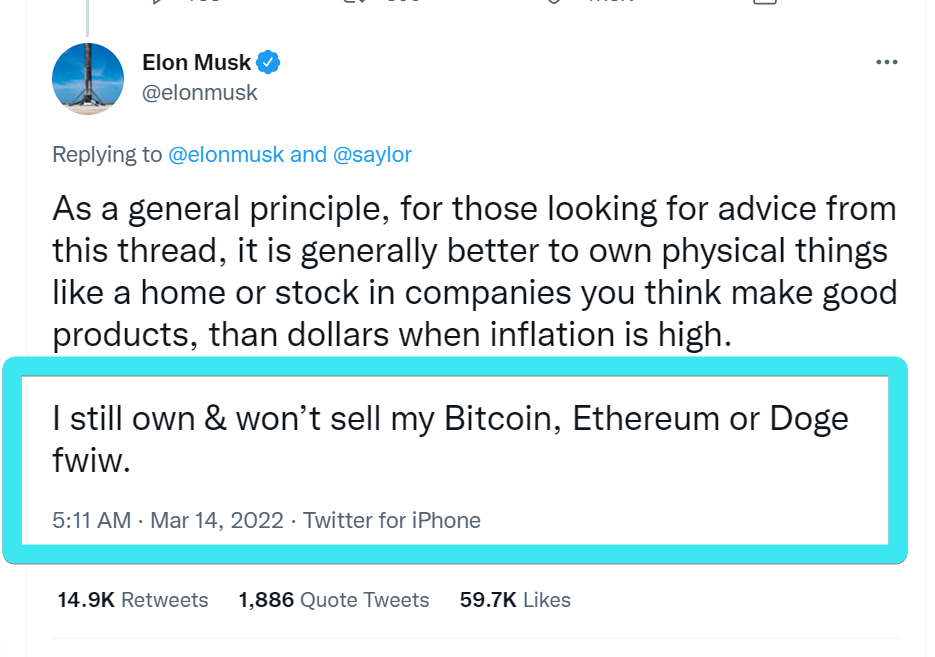 One might argue that he still holds the personal coins he believes in and had to act in the best interests of Tesla’s shareholders. Still, I can see some bullshit here. But that’s probably just me. Tesla is, on the one hand, environmentally friendly, but when one builds a Gigafactory, then that’s not a problem. Keeping a lot of BTC isn’t either.

We don’t wave green flags here at SFX. We know crypto can be brutal on the planet but isn’t mining coal or other materials? People sell a lot of stuff, which still makes them profit. Are you readers confident that you are not a coal collector? How about the chemical formula of diamonds? Do you use them in any other way than looking and showing them to others?

Hodlers listened to Elon about not making it a BTC judgment. Or maybe Musk’s magic on the crypto market is passing as his fame reaches its top? Well, see you in the coming future…

Make sure you are ready for today’s Tesla trading when Nasdaq opens at 3:30 UTC. GO TO SIMPLEFX.