USDCHF is a Forex Pair to Watch This Week

The formation of the USDCHF currency pair hints at the construction of an upward trend that moves within the green channel. In the second half of January, the price pushed off from the lower green line and began to move up. Not so long ago, the price reached the upper green line, however, the bulls were unable to break through the upper green wall. 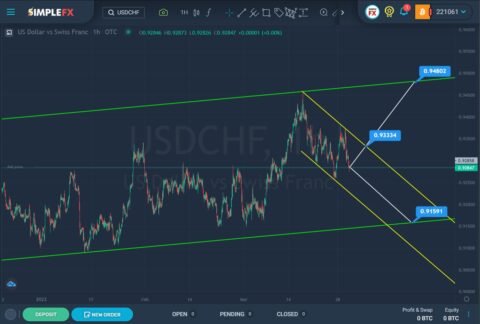 From the second half of March to the present day, the price gradually decreases in the lower green line direction within the descending yellow channel. At the moment, the price is in the center of the green channel. There is a high probability that the bears will soon approach the support level of 0.915. If this price level is broken, then the decline of the USDCHF pair may continue to lower levels.

An approximate scheme of possible future market movement is shown on the chart.

If the bears can hold their positions, then it is recommended to continue selling. If bulls enter the market, then it is worth considering opening deals for purchases.