The British pound was hobbled early this week against the Euro, Dollar, and other currencies when Bank of England Governor Andrew Bailey reminded financial markets about an increasingly unpredictable scenario for bank rates. 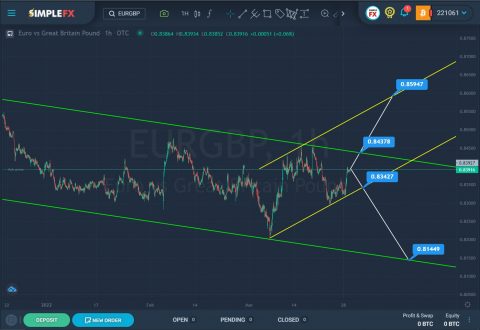 The current formation of the EURGBP currency pair suggests the construction of a large downtrend that moves within the green channel. We see that since the end of December last year, the market, having reached the upper green wall, began to move in a downward direction.

At the beginning of March, the price touched the lower green line, but the bears failed to break through it, the price pushed off and continued its upward movement. The last ascending section of the chart describes a yellow channel.

If the lower yellow line is not broken, the price will push off from it and start moving upward. We see that there are no obstacles on the way for the bulls to the upper green line, especially since it is not so far away, so there is a high probability that the bullish trend will continue to the resistance level of 0.843. If the level is broken, the currency pair may continue to grow in the direction of the resistance level of 0.859, which is located on the upper yellow wall.