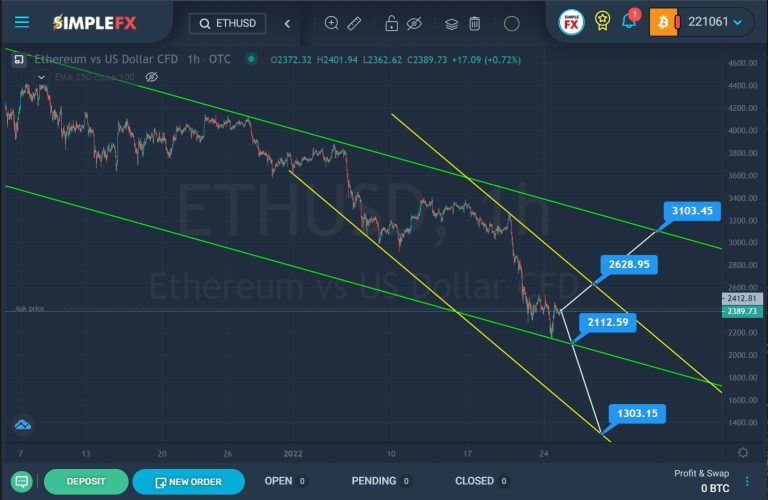 Ethereum fell under $2,2 support and hit $2148 on Monday, the lowest price in six months. It recovered quickly and is trading above $2,400 on SimpleFX. Traders who had BUY orders opened around $2,200 made a big profit so far. Some Ethereum holders bought in as the crypto is still priced twice as high as a year ago.

Where is the second-largest cryptocurrency heading next?

ETHUSD seems to be forming a global trend that is rapidly moving down within a large green channel.

At the end of December, the price touched the upper green wall, the bulls could not break through the resistance line. Then the market turned around and began to move in a downward direction. The last section of the chart, which was formed from December to the present day, describes a descending yellow channel.

Currently, the price is in the lower green area, not so long ago the bears already tried to break through the green line, but they did not have enough strength. In the current situation, there are two possible scenarios. Bears can continue to push the price down to the lower green line, and if they can break through the support level of 2112.59, then a path will open for them to the lower yellow line and the support level of 1303.15.

In the second option, the price can rise to the upper yellow wall and the resistance level of 2628.95. Only with a successful breakdown of this level, market participants can wait for the continued growth of the currency pair. The next level where the price can rise, the resistance level of 3103.45, is located on the upper line of the green channel.

With the downward movement of the market, it is worth considering opening sales deals. When confirming an uptrend, we can consider opening long positions.