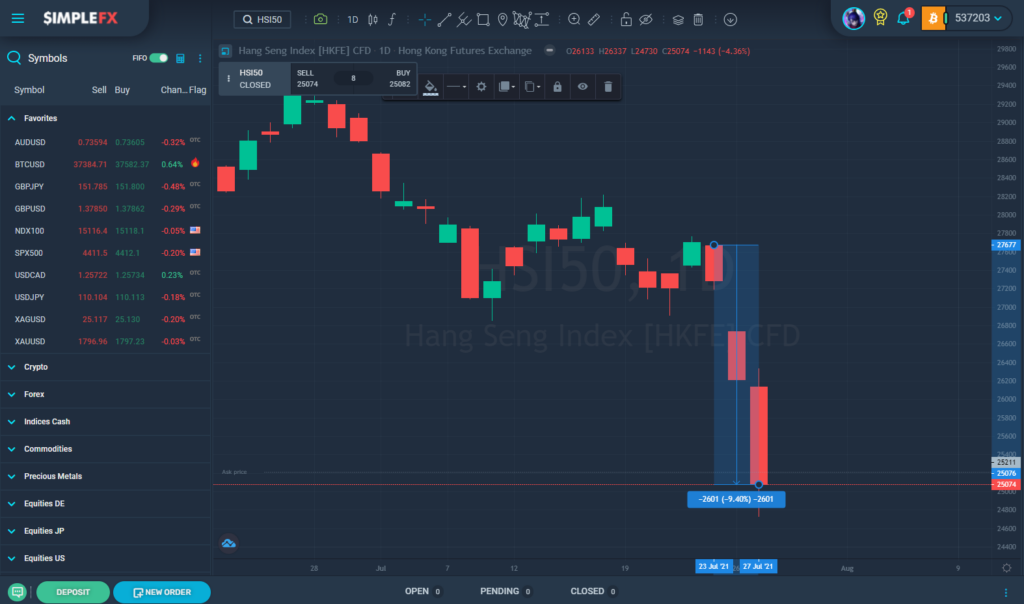 Shares of Chinese companies listed in the U.S. have seen their most significant drop since 2008. At the same time, Hong Kong’s Hang Seng index available on SimpleFX fell 9.4% in three trading days. The Hang Seng Index monitors the performance of Hong Kong’s stock exchange’s largest companies.

The Nasdaq Golden Dragon China Index, which follows the 98 most extensive US-listed Chinese stocks, has fallen by more than 15% in the last two trading sessions. The index has now plummeted over 45% since hitting a record high in February. The decline comes after Beijing announced an investigation into China’s education and technology industries this past week.

China tech stocks have had their biggest slump in the U.S. since 2008’s financial crisis, as authorities are cracking down on online services from food delivery apps to music streaming platforms.

China’s antitrust regulator released new guidelines Monday that could affect the profitability of food delivery companies both inside and outside China, including Meituan and Ele.me. The policies introduced minimum wages for delivery drivers.

After historically high growth rates, China’s stock markets have seen a dramatic drop, including the 17.6% decline from the fastest-growing delivery app Meituan.

The Hang Seng index fell by 4.22% in Hong Kong on Tuesday, the most significant drop since 2008 when the world was experiencing a financial crisis.

The Hong Kong-listed shares of three Chinese tech giants – Tencent, Alibaba, and Meituan – all fell heavily on Friday, with Tencent slumping 8.98%. At the same time, Alibaba and Meituan tumbled 6.35% and 17.66%, respectively.

In the latest blow, China unveiled a large-scale restructuring of the country’s private tutoring industry.

The private tutoring sector is worth $120bn. Still, the regulations say the institutions providing tuition on school curricula will be registered as non-profit organizations. The announcement left stocks of U.S., Hong Kong, and Chinese private education firms on the decline.

The recent slump in Chinese stocks is a cause for concern about the future of China’s economy. Still, it also reflects underlying problems with how Alibaba has been operating for years.

The investigation found that despite Alibaba’s market position, it had engaged in lax enforcement of intellectual property rights and dominance on its platform to promote its own products or sellers using AliPay, a subsidiary company.

This latest incident merely amplifies preexisting concerns voiced by observers about business practices that provide an unfair advantage over those who rely on other platforms for commerce].

Recent declines in China’s stocks have had little effect on the global oil markets yet. The same has been true for the US and Eropean stock markets, which seem steady. Stay tuned when the NYSE opens at 14.30 UTC today.