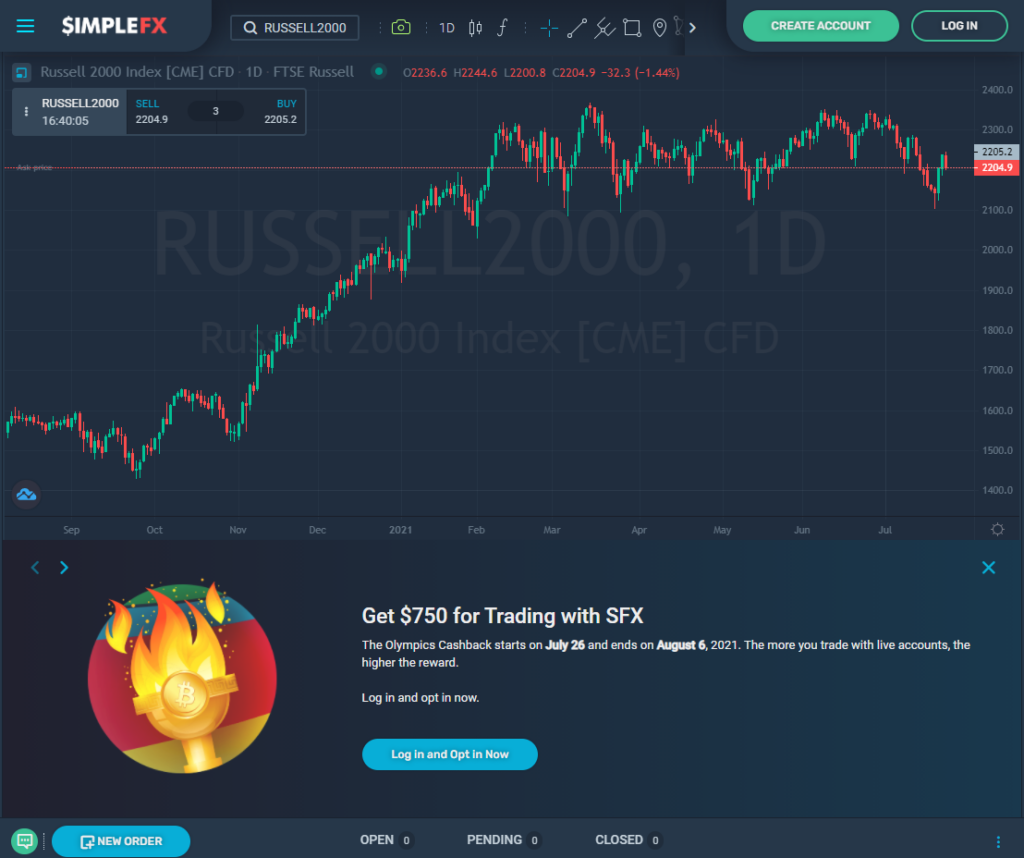 The Russell 2000 Index is now available on the SimpleFX Trading App. The index contains stocks of 2,000 small-cap companies and covers 98% of the investable U.S. equity market. This new addition to our trading app will allow you to trade a broader range of securities to diversify your portfolio without having high capital requirements or requiring extensive research time investment.

We have added this intriguing index on a request from a trader at the SimpleFX Community forum. If you have any new listings ideas, don’t hesitate to post them in this thread.

Russell 2000 is an index of stocks selected according to their market capitalization. Big companies have less chance of being included in the Russell 2000 than small ones.

FTSE Russell, a subsidiary of the London Stock Exchange, released Russell 2000 on June 1, 1984, and it originally represented only U.S. companies that were not part of the S&P 500. However, the index expanded to include other companies while sticking to the same idea in its construction.

The Russell 2000, known as US2000, RTY, or RUT, is available at SimpleFX under a RUSSELL2000 ticker. The value of the index has grown from $1.34 billion at launch to its current value of above $4 trillion.

The Russell 2000 serves as a benchmark for U.S. companies that are not among the biggest 500 corporations in terms of market capitalization, and it includes approximately 1600 stocks currently.

The russell2000 is a market capitalization-weighted index, and it comprises approximately 2000 stocks representing roughly 98% of the entire U.S. stock market. The Russell 2000 has more small companies than large ones, but still, 33 larger companies outshine all other Russell 2000 stocks combined.

As a benchmark for micro-cap companies, Russel 2000 has several advantages over S&P 500. The Russel 2000 is more volatile because of its low market capitalization requirements rather than its stock price. Russel 2000 has lower fees for investors who want to invest in index funds. However, this is of no greater significance for SimpleFX users, who buy and sell the index without any fees.

When compared with the S&P 500 index, Russell 2000 has approximately 6000 small-cap companies in its composition. The largely overlapping membership makes the index and S&P 500 mutually exclusive at least 6% of the time when they are published together.

Check out RUSSELL2000 in the SimpleFX WebTrader.

The Russell 2000 index has demonstrated significant volatility, making it an attractive investment opportunity to many. With the complexity of the markets growing, you may expect RUSSELL to move up and down in the next few years.