This Is The Best Time to Trade EURUSD

Pandemic, GDP growth concerns, rising federal debt, and the upcoming US presidential election this is a fore margin trader’s paradise. EURUSD has been showing some exciting price trends recently winning back popularity among traders. Now there’s one more reason to trade the pair.

SimpleFX $2000 US Elections Trading Cup has just begun. If you want to win this week’s round all you need to do is trade the most popular forex pair – EURUSD.

You probably do it anyway. However, only this week SimpleFX users with the highest EURUSD trading volume on one of their live accounts will win a prize.

Euro is not dead yet

If you thought that the euro is done you might be wrong. Although the old continent’s most important economies are stagnant at best, and the US growth is outpacing Europe’s, it’s not clear if the dollar will prevail. Actually, since the beginning of the year, the euro has appreciated by over 6% against the dollar. We have slow growth on one hand and uncontrolled public debt on the other. EURUSD is an attractive trading pair for margin traders again! 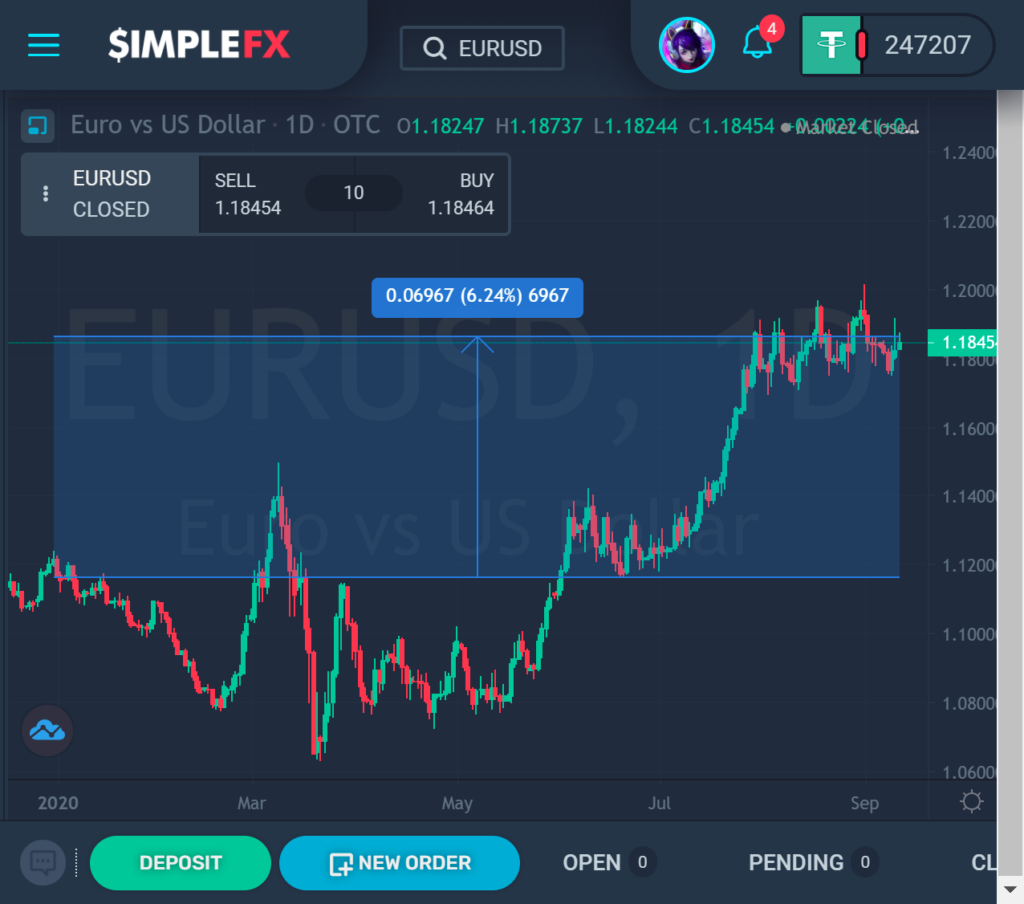 Recently ECB decided not to change the main rates and keep the deposit rate at -0.5% and refinancing rate ad 0%. What pulled the euro up against the dollar was the statement by ECB Presidente Christine Lagarde about the consensus over the strength of the shared currency. The bank doesn’t plan to raise the rates until the inflation rate goes over the target at 2%.

The forex market seemed to be impressed by this confidence and belief of EBC in the Eurozone’s economy, and EURUSD moved higher at the end of the last week.

The election that will shake the market

The presidential race between Donald Trump and Joe Biden is extremely close. While the leader of the Democratic party seems to still have a substantial advantage over the residing president in the polls, analysts suggest that smart investors should take both scenarios into consideration.

The next four years of Donald Trump in the office or a change to Joe Biden could affect both the US and Eurozone’s economy. However, it’s very difficult to state which way. One effect of the upcoming election seems to be probable. More or less half of the American population will be very unhappy with the results, as the society is deeply divided. The summer riots against the brutality of the police prove the point.

While we would not dear to tie any long term EURUSD strategy to the result of elections. The fierce electoral campaign battle combined with uncertainty about the results, and looming civil unrest can provoke massive forex market moves.

Since Donald Trump was elected for president, the euro has appreciated by 8% against the dollar. It doesn’t mean he is the reason why, but many investors may take it for granted. The Republican president is not a strong currency supporter as he sees it as a threat to the competitiveness of American goods and services.

On the other hand, the stock market is experiencing an unprecedented boom during his presidency. Joe Biden represents a more leftist worldview, and the financial market may not be as enthusiastic about him winning the race.