You are at:Home»News»Tesla Mocks Short Sellers as the Stocks Soar

Tesla stocks opened way above the line on Friday than dropped a little bit, but still finished the trading week at the record price at $1208 per share. The company’s value thanks to the quarterly report that came out earlier last week.

The car manufacturer is one of the most controversial companies in the world. It has millions of fans, and believers who drive the price up, as well as powerful short-sellers, who are waiting to profit from what they believe imminent sellout of the overpriced asset.

“Celebrate summer with Tesla Short Shorts. Run like the wind or entertain like Liberace with our red satin and gold trim design. Relax poolside or lounge indoors year-round with our limited-edition Tesla Short Shorts, featuring our signature Tesla logo in front with “S3XY” across the back. Enjoy exceptional comfort from the closing bell.” 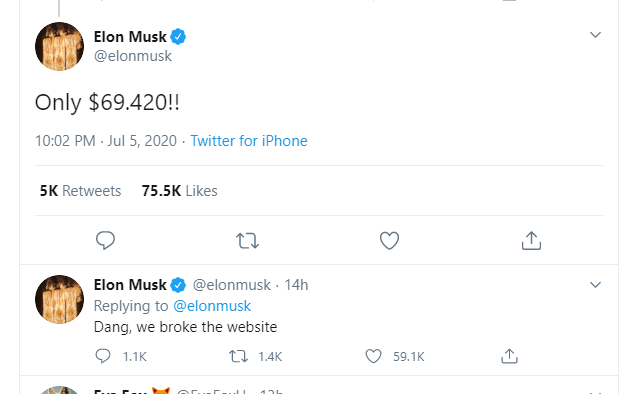 “420” refers to Musk’s tweet in 2018 then he said he considered Tesla private for $420 per share. Additionally, 420 also a code word for marijuana. Elon Musk famously smoked a join on Joe Rogan show, which also triggered a sellout by shorts. You can see the video below.

Will short-sellers react to the provocation? Make sure you have your SimpleFX funded ready before Nasdaq opens today!

According to FactSet, Tesla was expected to deliver approximately 72,000 vehicles over the last three months. Bloomberg gave a slightly higher estimate of 83,000 cars delivered in the second quarter. Tesla exceeded both of these predictions, by providing 90,650 cars. These delivery figures are the closest report to sales that Tesla offers.

These high numbers were unexpected, due in part to the fact that Tesla had to shut down both their Shanghai and their Fremont, California plants in May. These shutdowns were cited as being due to a parts shortage caused by the pandemic and subsequent lockdowns. These delivery numbers from Tesla can be broken down by model, but the electric car company does not specify how many of these cars were manufactured at their Chinese plant, and how many were manufactured in the United States.

Stocks in the company have risen by 185% this year, indicating massive growth throughout these unfavorable economic conditions. Despite the fact that Tesla has appeared to weather the global pandemic better than its competitors, it is clear that they have still struggled. Reports show that deliveries from the company in the second financial quarter fell by 4.8% when compared to last years’ numbers.

Tesla has also announced that it plans to support German company CureVac in its attempt to create a vaccination against COVID-19. Since February 2019, CureVac has been working on vaccines for a range of diseases such as rabies and yellow fever, that utilize mRNA technology. RNA molecules can be reproduced in a laboratory setting, which can then be exposed to the virus in order to kill it. This process is considered novel as it does not require genetically modifying living cells, which is a process seen in other forms of the vaccine. This technology is now being used by the company to develop a potential vaccine for COVID-19.

Tesla will begin manufacturing portable mRNA “printers”. These printers, also known as mRNA production units, will be made, then sent to locations in need where they can then produce the vaccine as soon as it gets approved. CureVac, which is supported by the Bill & Melinda Gates Foundation, is not the only company that is using mRNA technology to hopefully create a vaccine. Pfizer and BioNTech are two other partner companies that are also hopefully developing a successful vaccine.

They have recently released data that showed that their potential vaccine has already produced antibodies against the coronavirus in human patients that were part of a trial. This certainly puts more pressure on CureVac, but if their potential vaccine is approved, this partnership with Tesla will mean that they have the capacity for larger-scale production and outputs than their competitor.