You are at:Home»Analysis»SimpleFX Crypto Storm Forecast – BTCUSD, ETHUSD, and XRPUSD

Coronavirus pandemic is causing unprecedented turmoil in global markets. While stocks, oil, and other “prosperity” assets seem to be doomed, there may still be a light at the end of the tunnel for cryptocurrencies. So far bitcoin, ethereum, and ripple suffered losses that cut their prices in half. What will happen next? Read our technical analysis

Bitcoin at the crossroads

The current BTCUSD structure shows us that a significant and long-term downtrend is forming, which is shown by the lines of the yellow channel. After the market reached the upper line of this channel, we saw a rebound and a rapid decline in the direction of the lower wall of this channel. Most likely, at the moment, the bears are heading to the support level of 3258.65, which is at the previously indicated line. 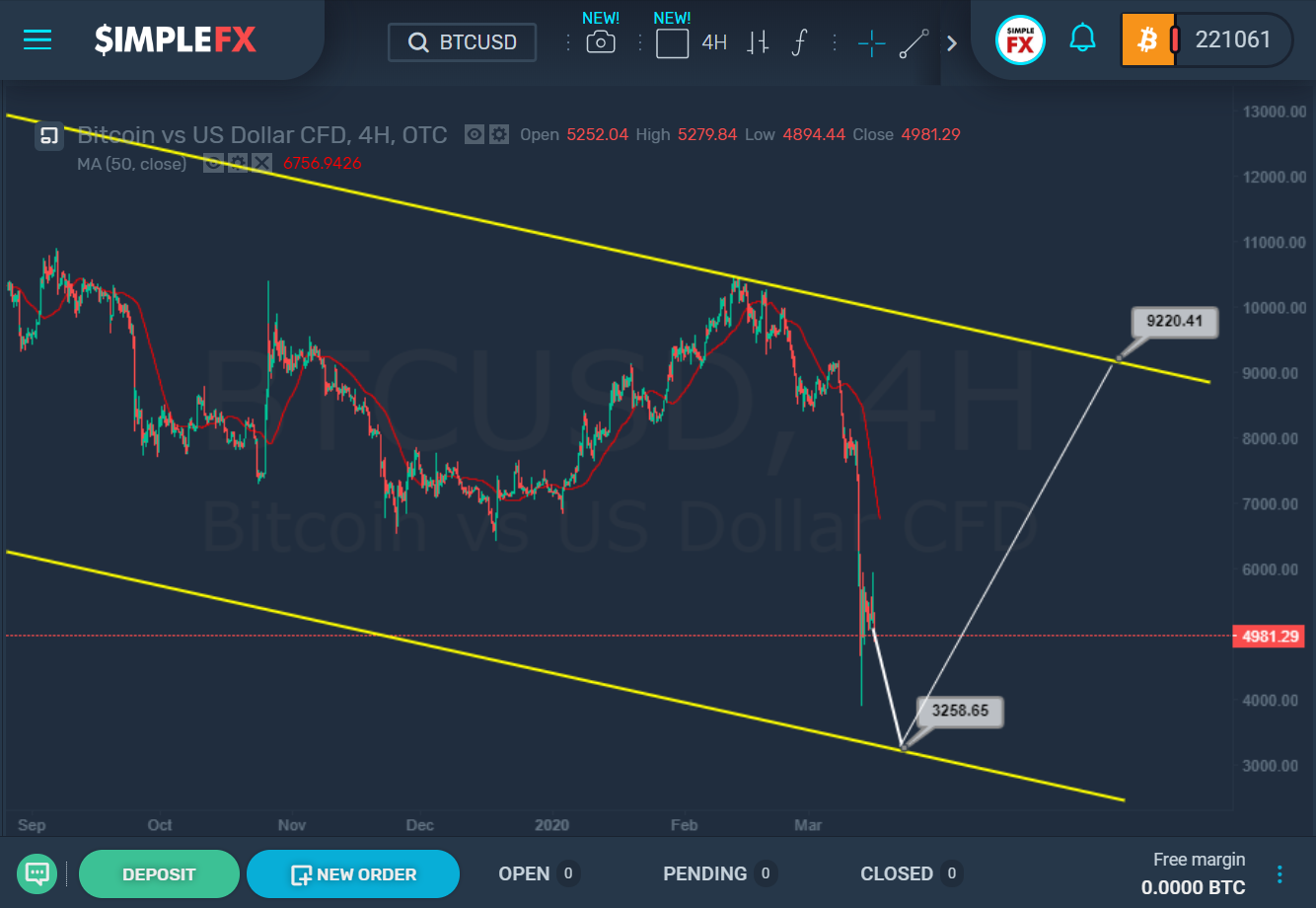 Given that the market was moving down very quickly, the level of 3258.65 may be reached within the next few days. Then, if the bears fail to break below this support, we may see a gradual increase in the price in the direction of the upper line of the yellow channel and the resistance level of 9220.41.

Keep in mind that the forming lines of the yellow channel have a downward slope, so if we see an uptrend after the rebound from 3258.65, the market will move up slowly, because the bulls will have to overcome the resistance of the descending channel.

In case of a break below the level of 3258.65, the decline will continue even lower, but at the moment, it isn’t very easy to say to what degree the bears will push the price down.

Ethereum may go both ways

On ETHUSD, the situation is similar to that on BTCUSD. For a long time, the bulls pushed the price in an upward direction, gradually approaching the upper line of the yellow channel. Then, after a double rebound from the top yellow wall, the market began to fall rapidly and sharply. 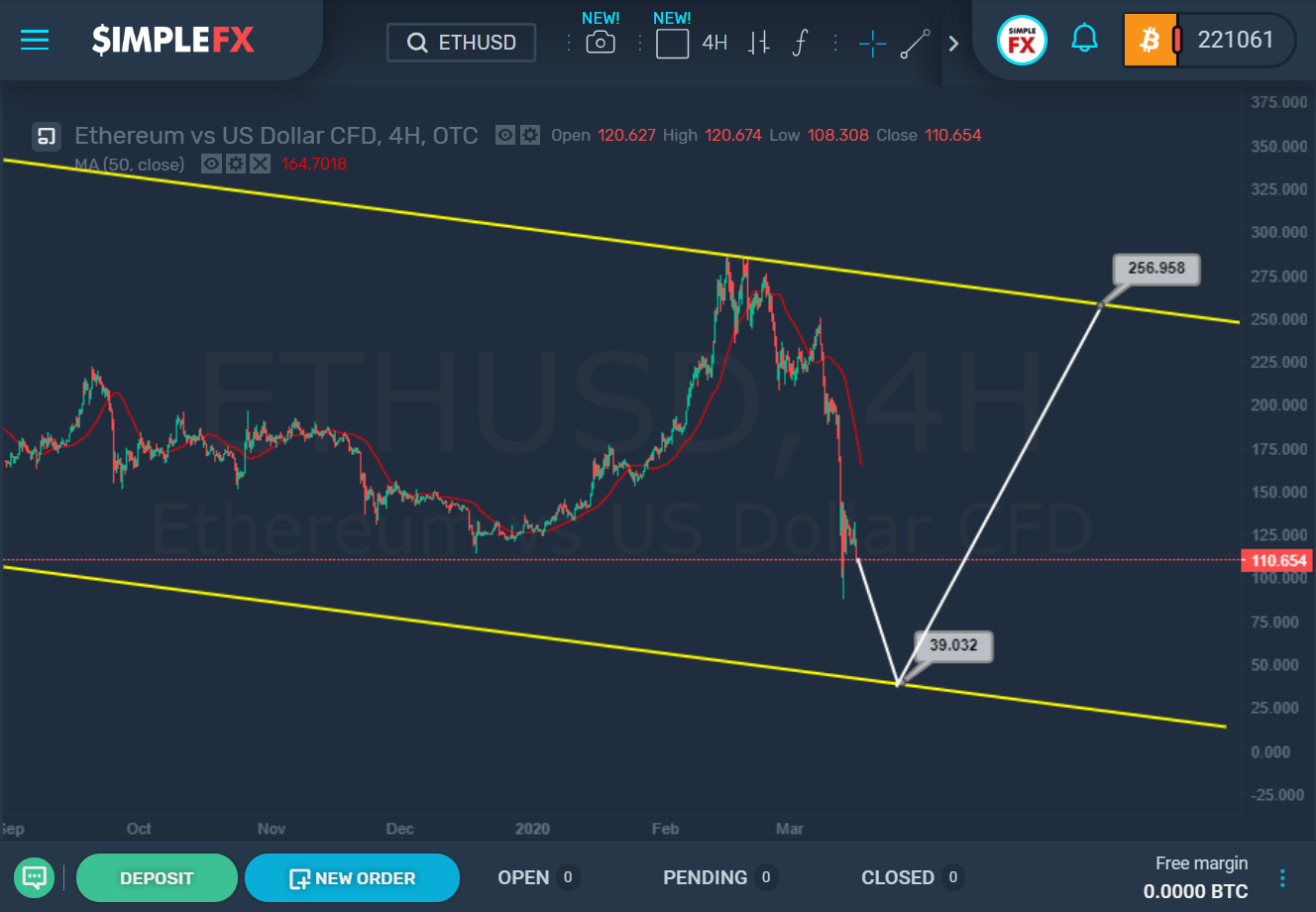 Most likely, the market is now dominated by bears, and they will not give up until the lower wall of the yellow channel, and the target support level of 39.032 is reached.

When this level is reached, the market could expect a new wave of growth to the upper yellow line and the resistance level of 256.958. It should be taken into account that as for BTCUSD, the possible growth will occur against the slope of the descending channel, so this path will not be easy for the bulls, respectively, we could expect a slow and unhurried rise.

However, in the event of a break below the support level of 39.032, the ascending scenario will be canceled or postponed to a later date. So let’s keep an eye on how the market will behave near the lower line.

If the price goes below 39.032, then the market will continue to move down, but it is difficult to say where the bearish target may be located.

The situation for XRPUSD looks the most harmonious among other cryptocurrency pairs. We saw the market touch the lower yellow wall, which is the support line for the price, after which the price moved first in a sideways and then in an upward direction. So the upper yellow line was reached, from which the market pushed off and went down. 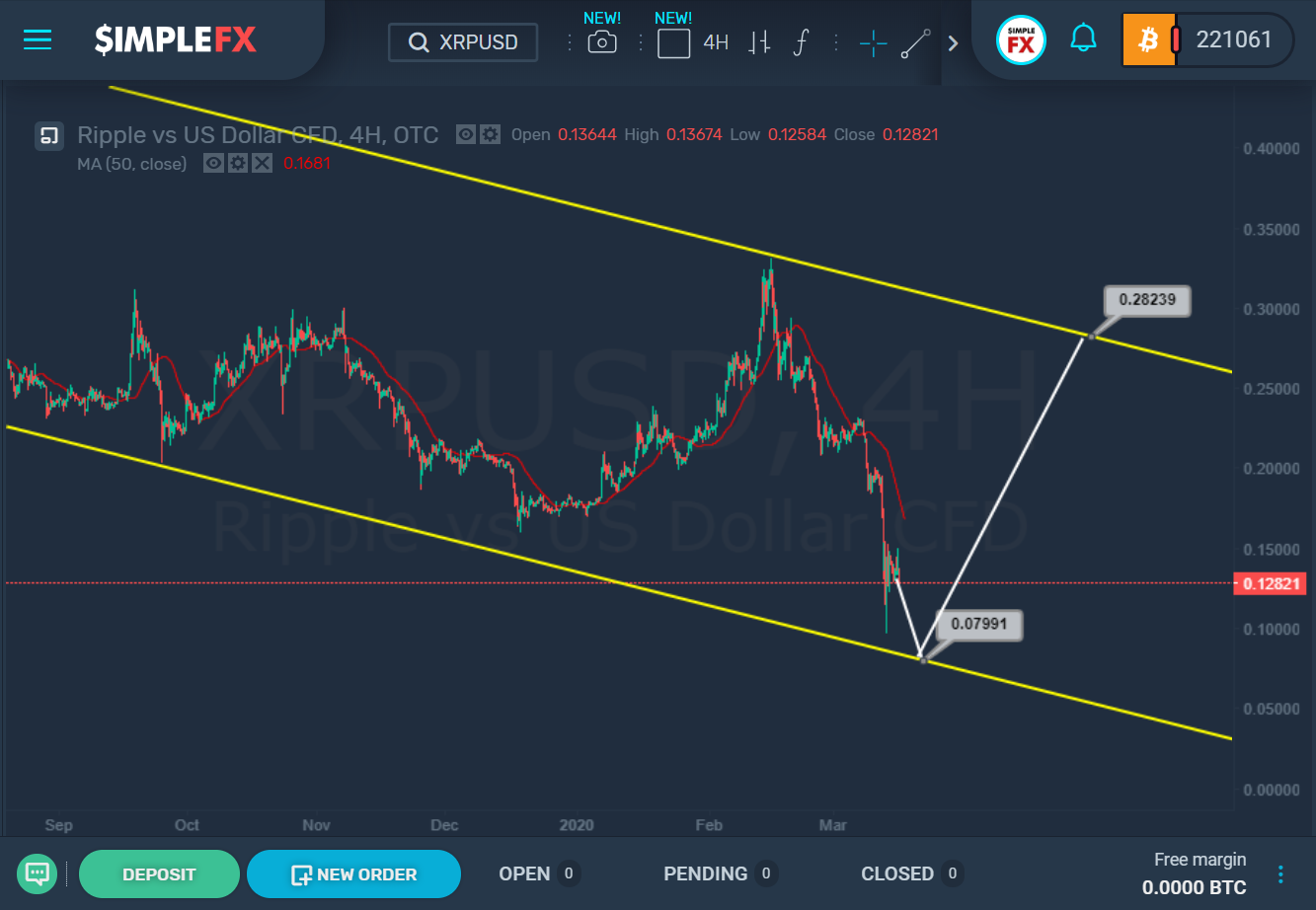 XRPUSD has formed a fast and powerful bearish trend. Most likely, now we see a decline in the 0.079 area, that is, to the support line. After the bears reach the specified level, we could expect a new wave of growth to the upper yellow line.

However, as with other major cryptocurrencies, this rise will occur against the tilt of the yellow channel so that the bullish trend may be prolonged.

If the bears manage to break below the support of 0.0799, the decline will continue in the future, but it is not yet possible to build a new downward channel to determine the target zone that the market can reach.

In this regard, we should wait for the price to reach the level of 0.0799 and see if we see a rebound or the decline will continue.