You are at:Home»News»Tesla Rally: SFX Traders Made 187% in Two Days

Tesla stocks are experiencing an unprecedented rally. TSLA.US jumped 36% in just two days of trading this week and almost 200% in the last three months. At the moment markets consider Tesla the most valuable automaker in the world. Tesla bulls trading with leverage on SimpleFX made 187% profit this week. 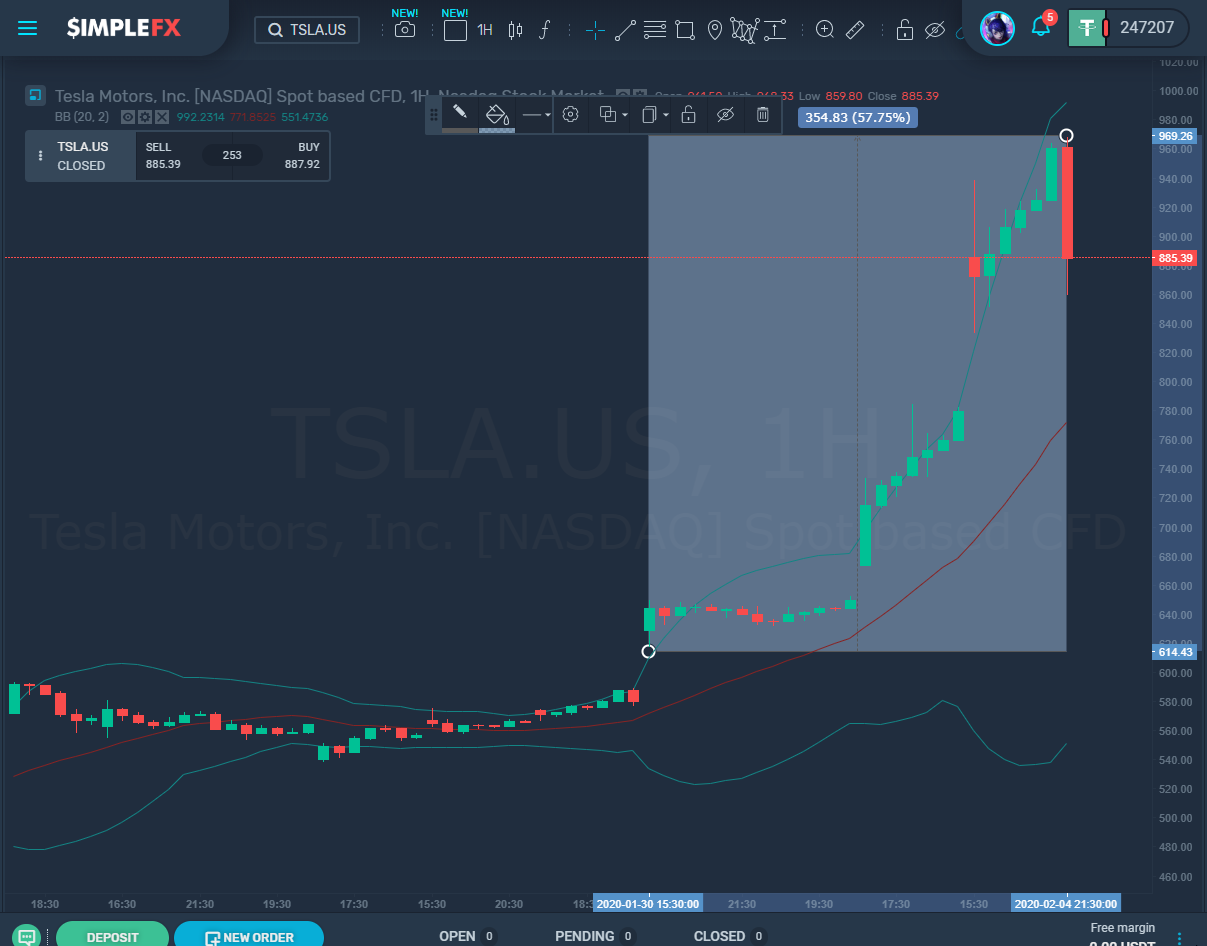 Up 57% since Friday Tesla is being loved by capital markets

Although Bulls are in charge, in the final hour of trading on Tuesday investors decided to cash in on the hottest shares of the week, as the price dropped from the maximum at $970 to $870. Whether you are Elon Musk fan and believer or consider Tesla a bubble, you can profit from Tesla stock.

Tesla is available on SimpleFX, so you can open your orders when the Nasdaq exchange opens today at 2:30 pm UTC. Make sure you don’t miss this train.

What’s going on? Are there any fundamental reasons for such an increase in price? Analysts point out that on one hand, Elon Musk got “more civilized”. He restrained from provocative tweets that where always fuelling Tesla shorters. He also focused more on controlling the company’s costs (operating costs down 7% in 2019), as well as fixed the company’s pricing. First, the popular-democratic side of Elon Musk pressured selling Tesla Model 3 to the mass customer for $35,000. Recently the company pivoted to focus on the high-end version costing $70,000. 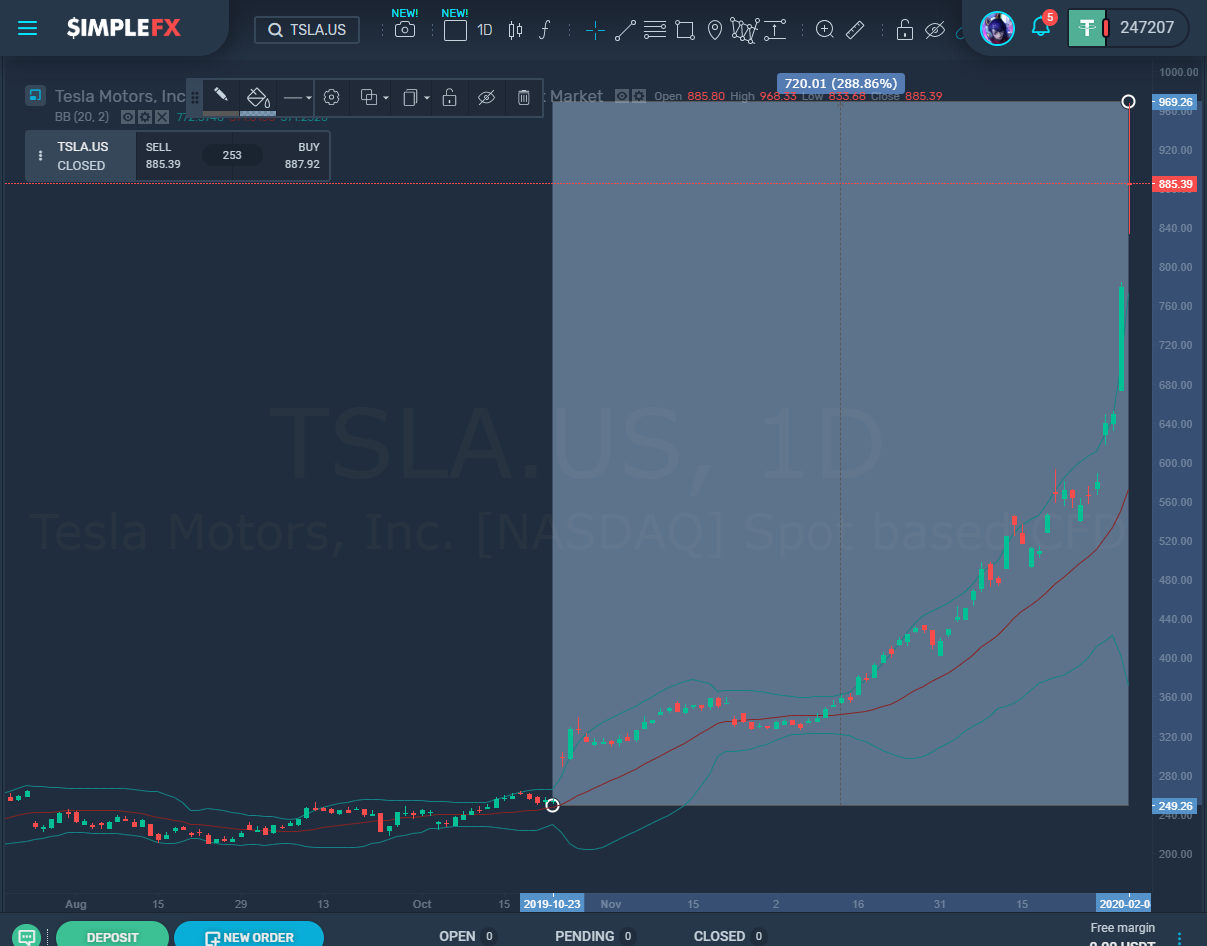 Almost 300% in three months is an impressive result. Are you high or low on Tesla?

Tesla stock went almost 58% up in just a few hours.

The electric vehicle market is growing. Automotive manufacturers will invest $225bn in the sector, according to an American consulting firm Alix Partners. In 2019 Tesla Model 3 took an impressive 80% of the EV sales.

In the fourth quarter, Tesla posted a second straight quarter profits and earned $1bn after capital expenditures. Nevertheless, the company closed in 2019 with a loss.

At the moment Tesla market capitalization is between $160bn and $170bn, which is more than GM, Ford, and Fiat-Chrysler together. Tesla plans to sell half a million cars in 2020. The big three sell 17 million cars a year.

Le’ts take a look at how much SimpleFX traders that were bullish on Tesla earned. Long positions (often leveraged) were popular on Monday and Tuesday. Buying Tesla at $644 on Friday afternoon, and closing the position on Tuesday along with the big selling wave that pushed the price to $885 brought impressive returns of almost 200%. 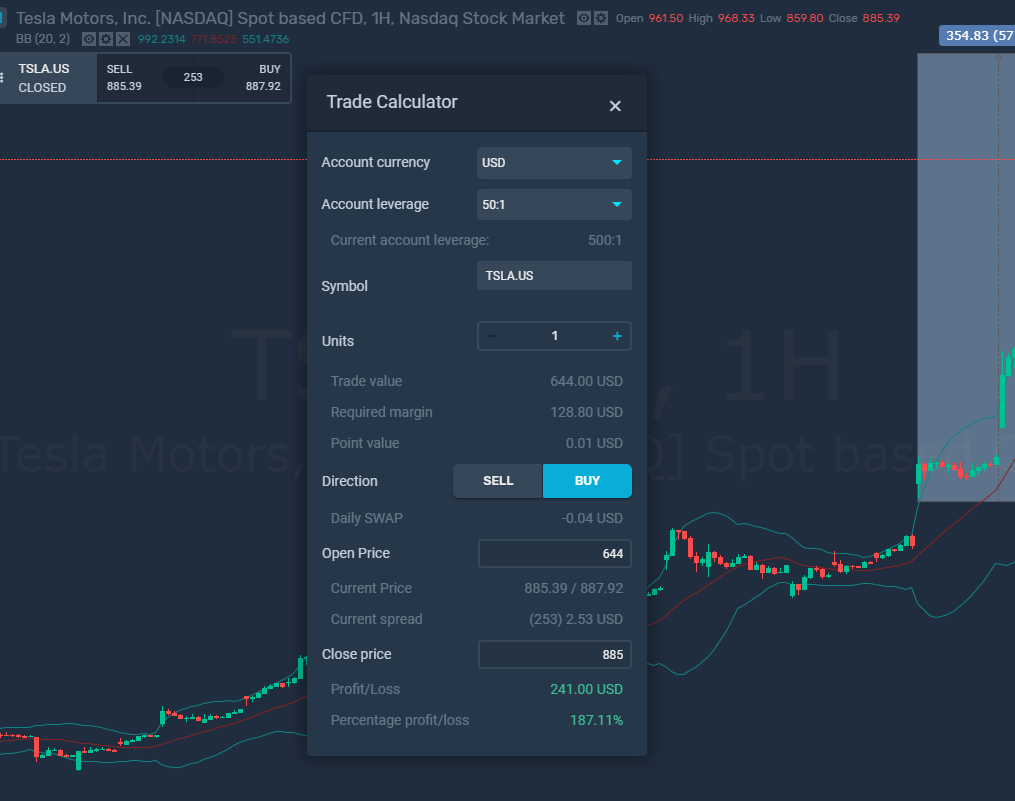 If you had or still have long positions on Tesla – congratulations. If you missed out on this exceptional market event, make sure you are trading with us during the next Nasdaq session.