You are at:Home»News»Uber May Not Be a Tech Company Under California Law. How Will It Affect the Stock?

California courts disagree with Uber’s statement that it is a technology company. Earlier in September, a bill was passed by the Californian Assembly and Senate which could be as early as January, eventually leading to substantially increased costs for Uber.

Uber’s valuation is already in between that of a tech company and a transportation business, but the new Californian Law could throw everything off and would mean that shareholders could reap the rewards if they have taken a punt at ride-sharing.

The bill in the state might force the company to change how it classifies its independent contractors, with them becoming employees instead. This would not be automatic, however. Instead, there would be a test in three parts that companies would need to go through to keep these employees at a distance. One of the more challenging parts of the text clarifies that to be one of the independent contractors, workers must carry out services outside of their usual remit within the company business. 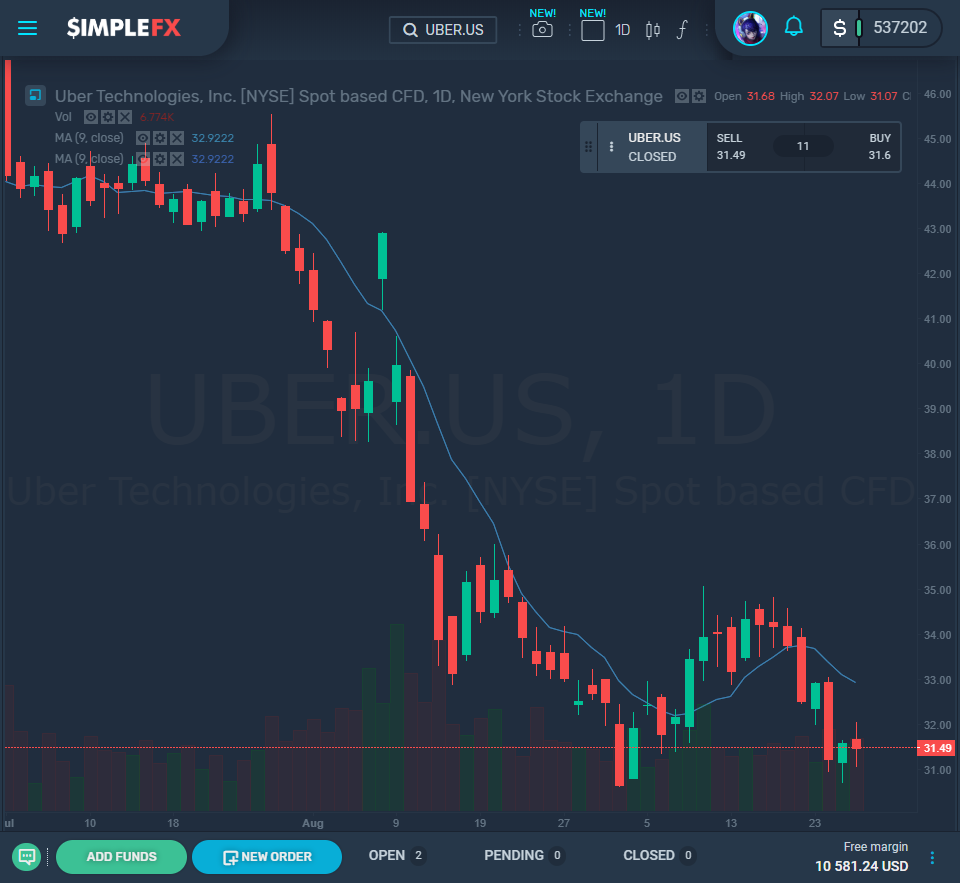 With SimpleFX you can open long or short postions on Uber stock with leverage.

This new test making drivers be employees means that the courts in California would deduce that the core service of Uber would not be technology at all but rather merely transportation. Any former rulings on this aspect have been ambiguous and mixed. A district court in California noted in 2015 that with Uber not being classified as a transportation company this “strains credulity.”

Last year, there was an arbitration ruling which found that was not in the ride providing business because it did not make any commitment to provide travelers with any ride, nor drivers with any passengers. This ruling was later upheld in the County Superior Court in L.A.

The valuation of Uber might be affected in the future. From its May listing, the company has lost over a quarter of its value in the market, and it is trading in a limbo-like state at present, somewhere floating around a transport company and a technology platform.

Uber’s shares are trading at a little over three times the forward sales but at a discount to sales of Facebook Inc. and Alphabet Inc. However, they are at a noticeable premium to transport companies like Landstar and J.B. Hunt, the latter two hovering around one time forward sales. The great rentals like Hertz and Avis are trading at around 0.2 times.

More and more Americans have become independent workers via taking second incomes with digital platforms such as Etsy and Uber to have enough money to live on. However, almost all of them than face the difficulties of having inconsistent income and benefits access.

How companies are classified outside of California could be significant. At the end of 2017, the E.U.’s Court of Justice ruled that Uber cannot be a technology service and must be re-classified as a transport service. In the same vein, earlier in 2019, the S&P made the classification for Lyft and Uber as trucking corporations. For Lyft, it stated that almost all of the company’s revenue was gained from ride-sharing connecting passengers with drivers. Uber has more than one place it operates. It is a business based on ride-sharing, which accounts for a little less than three-quarters of revenue from the second quarter of this year.

Today, investors are buying Uber stocks in the hope that autonomous vehicles will become a part of its platforms. While it continues to call itself a technology platform, it cannot be fully tech-minded based at this point. Drivers are pretty essential in ride-sharing at the moment.

Tony West, the chief legal officer at Uber, said last week that the new classification in California raises the bar but it does not mean that Uber can’t get over it. Investors are still clearly hoping that West is right.