You are at:Home»News»Bitcoin Trust at Record Levels as the Hash Rate Climbs to Historic Hights

Blockchain.com data has shown that on June, 29th Bitcoin’s hash rate hit 68.6 million TH/s, which is the highest it has ever been. This has been climbing since the middle of December last year, increasing by 113%. 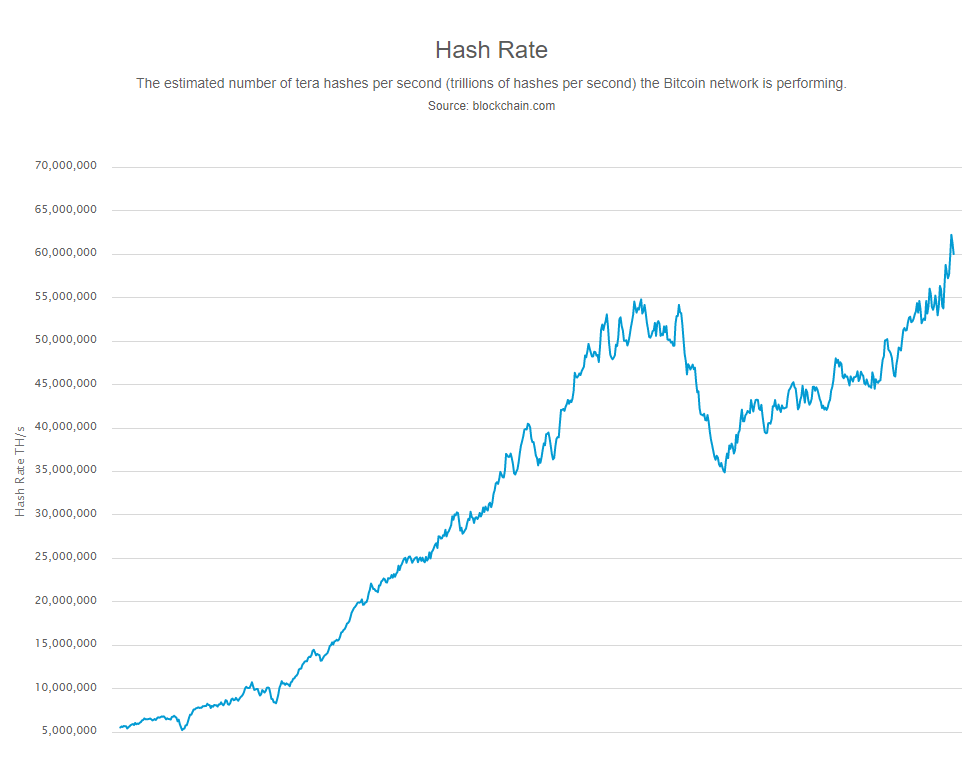 When talking about the hash rate, we are referring to the speed of an operation completion on the blockchain. That is to say, how much power miners are lending to the network. The end of June saw a vast 68,638,992 TH/s (trillion hashes per second).

This hash rate domination proves Bitcoin’s worthiness of the title as the network that is the most secure in addition to its leading position in the market. Hackernoon’s writer, Ted Shabecoff, said:

“Bitcoin is widely considered a safe harbor of cryptoassets, the oldest cryptoasset in existence, and it’s [sic]price and hash rate are harbingers of how the greater cryptocurrency market will perform. Unlike Litecoin, Bitcoin will not experience an imminent halving, an event that occurs every few years. However, in the months before May 2020, the next halving for Bitcoin, the asset's hash rate and the price will surely ascend."

Not a great measure

The hash rate, while being a great indicator of confidence in the network, is not a considerable measure when it comes to price movement. This is because the correlation between Bitcoin price and hash rate can be skewed because of inefficiencies.

When the price of Bitcoin increases, we see the hash rate increase at a later date. The same can also be said when prices move in the opposite direction.

Compared to grains of sand

A research team from the University of Hawaii claims that the number of sand grains on earth is around 7.5 quintillion.

Kevin Rooke has tweeted to the effect that there are hashes per second than there are grains of sand on the earth.

There is no need for a nuclear arsenal at Bitcoin. All of its stability and security is built-in. Simply put, there are thousands of people volunteering with millions of connected computers from all over the globe. There isn't a single point that could fail.

The bullish feelings in the current market mean you can imagine the possibility of more hashing power added. With Bitcoin’s hashing power being ten times the number of grains of sand, is it possible that we might get to the figure of the 1000 quintillion estimated stars in the universe?