Monday saw oil prices rise by more than $2 a barrel with OPEC and allies likely to extend the imposed cuts to supply further. A meeting in Vienna later this week will confirm the extension to the end of the year at least, it is predicted. 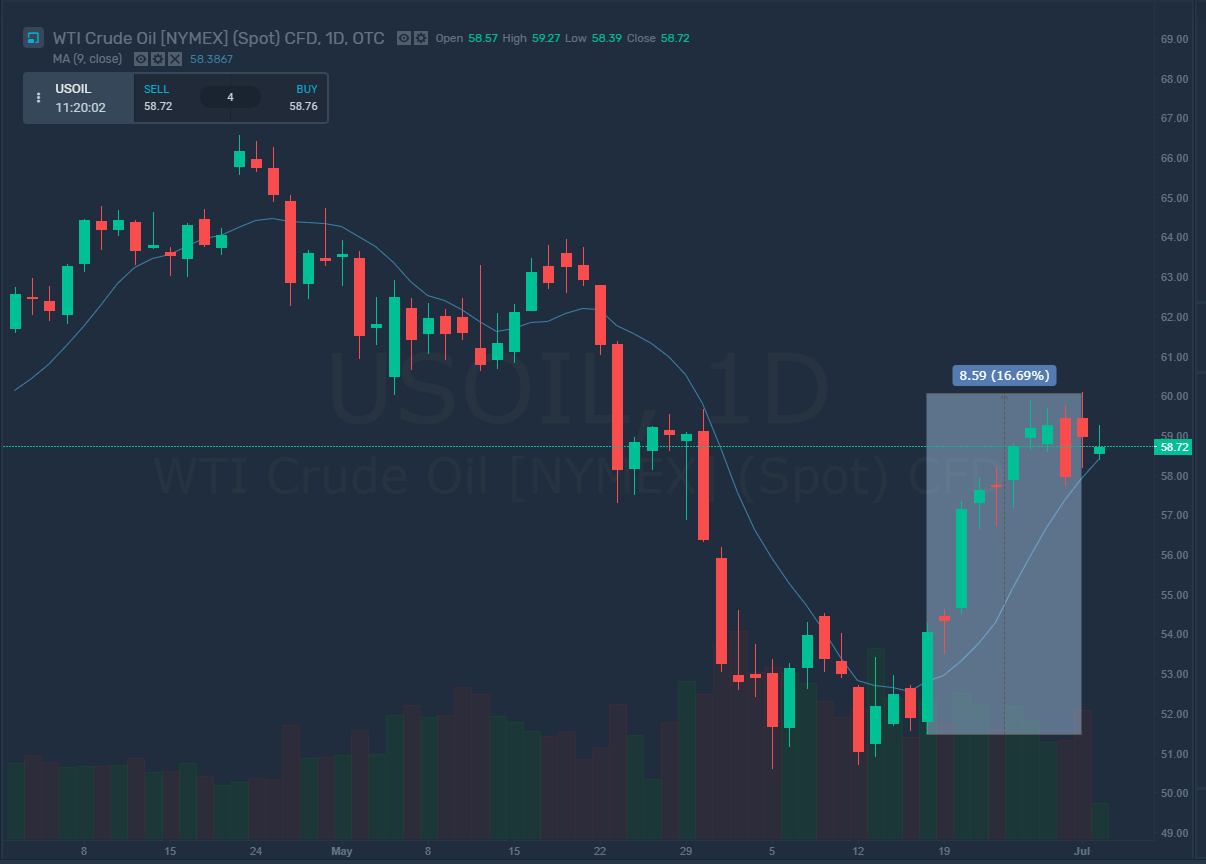 Since mid-June, the WTI Crude Oil quoted on NYMEX and tradable SimpleFX as USOIL has risen 16 percent.

On Monday, Iran joined Saudi Arabia, Russia, and Iraq in their support of a policy to prop up crude oil prices due to global economies weakening.

OPEC (The Organization of the Petroleum Exporting Counties) along with Russia and other countries that pledge their allegiance (OPEC+) are to meet on Monday and Tuesday to discuss these supply cuts. It has been two years since the reduction in oil outputs began with the aim to prevent a slide in global prices due to an increase in production in the U.S. and a weakening global economy.

Vladimir Putin, Russian President since 2012, has agreed with Saudi Arabia to continue extending the cuts to output to 1.2 million barrels a day in between six and nine months.

Khalid al-Falih, Saudi Arabia's Energy Minister, agreed that the deal will probably be extended for nine months and that there was no need to make deeper reductions.

"If Russia, Saudi Arabia, and the other key OPEC members keep production at the levels they produced in H1-19 they will ensure that the global oil market is not flowing over. They will only have to pay a little restraint while reaping a nice oil price of $60-70 a barrel.”

OPEC is losing market share with Iran and Venezuela taking on most of the burden. The pain isn't felt by all OPEC members equally.

In April, the output of crude oil in the United States rose to a new monthly record with 12.16 million barrels per day. This is according to the United States Energy Information Administration. It is believed that the growth of shale production peaked last year, however.

Elsewhere, there seems to be a thawing of Chinese and U.S. relations, which have caused a buoying of financial markets. It was agreed that further trade talks would take place between these two world-economy front runners. This has led to a surge in stocks. Many businesses praised Trump for not carrying out his threat of imposing tariffs on $300  billion of Chinese products.

Citi analysts, however, have liked these announcements as a likely temporary truce that will be used to de-escalate the apparent tariff and trade war. There is a lot of skepticism about whether or not a deal will be reached any time soon.