You are at:Home»Trading Academy»The Art of Short-selling – How to Profit from a Falling Market

Have you ever noticed a bubble before it burst? Or merely an overpriced asset, when there was “no way it should be valued that high.” Have you ever wanted to put your money against the herd sentiment that went wrong? How to make money when everyone is buying and pumping the asset that, according to you is already overvalued?

The answer is simple –  short it. In this post, I’ll explain to you how it works, and how you can profit from it.

Short selling became popular thanks to CFD trading. The beauty of CFD platforms (such as SimpleFX WebTrader) is they give you an opportunity of making a profit whenever the market goes up or down.

Before individual investors could only buy an asset hoping its value will go up and you will be able to sell it at a higher price. Now you can shot sell easily with a trading account ran in dollars or cryptocurrencies with no minimum deposit.

A great way to hedge

Let’s say you are a long term Bitcoin believer – you hold the coins because you assume that it will become the future money or future gold. In the long term of years or even decades, its value should explode according to this scenario.

Of course, like any other cryptocurrency investor, you observe the market trends, so you can predict in which periods the bears will take over forcing a downtrend. As a long term Bitcoin investor, you could hedge your central position (keeping the cryptocurrency for a longer time) by opening a short position temporarily. You can even do it with leverage to benefit the most.

With a platform such as SimpleFX, you can short anything. Gold, Bitcoin, Ethereum, Tesla, Uber, whatever you want. This opens amazing opportunities. Now you can finally make money on your predictions on the future of companies, currencies, or commodities going down. A downfall is often easier to spot than a rise.

While in a traditional long position trading you want to buy low and sell at a higher price, to make a profit with short selling you need to think the other way around. You sell first and buy the asset later to close an order. You want to repurchase the stock, currency or commodity at a lower price you had first sold it.

When short selling your position is opened by borrowing shares of a stock or other asset. The main difference between short positions and the long positions is the loss limit. While with directly buying assets, it’s limited by the buying price. If you purchase an ounce of gold for $1440, you can loose exactly $1440 if somehow the price of the metal went down to zero.

If you are shorting gold at $1440 per ounce (which was a great move a few days ago, at the point you can see in the screen below), your loss is unlimited as there’s no cap for the price of any tradable asset. 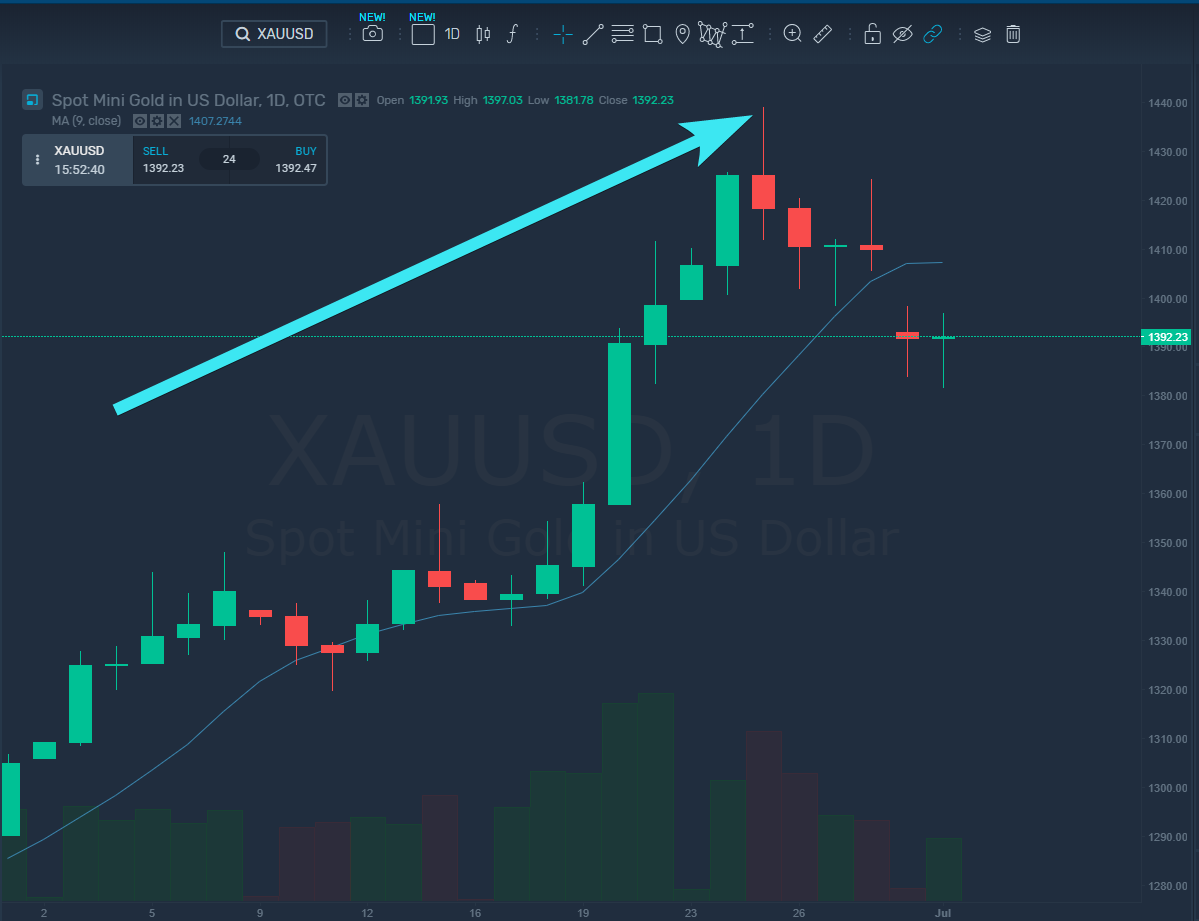 That’s why when opening a short position you should always remember to set a “stop loss” value to your order.

Fortunately, the best CFD brokers, such as SimpleFX, offer negative balance protection to their accounts. You may open as many accounts as you like (with no minimum deposits), and on each one of the accounts, even if you forget to set any stop loss value, your exposition is equal to the money you have paid into the account you are trading with at the moment.

How to open a short position

Let me give you a recent example. A few days ago a mindful Bitcoin observer could have noticed that the BTCUSD climbing 83% in just two weeks may be enough for this rally. Maybe it’s time for some of the investors to take profits; perhaps some big players would like to buy some more at a discount. If the hypothetical trader wanted to make a profit on this scenario, the wise thing to do would be to open a short position with a CFD contract. 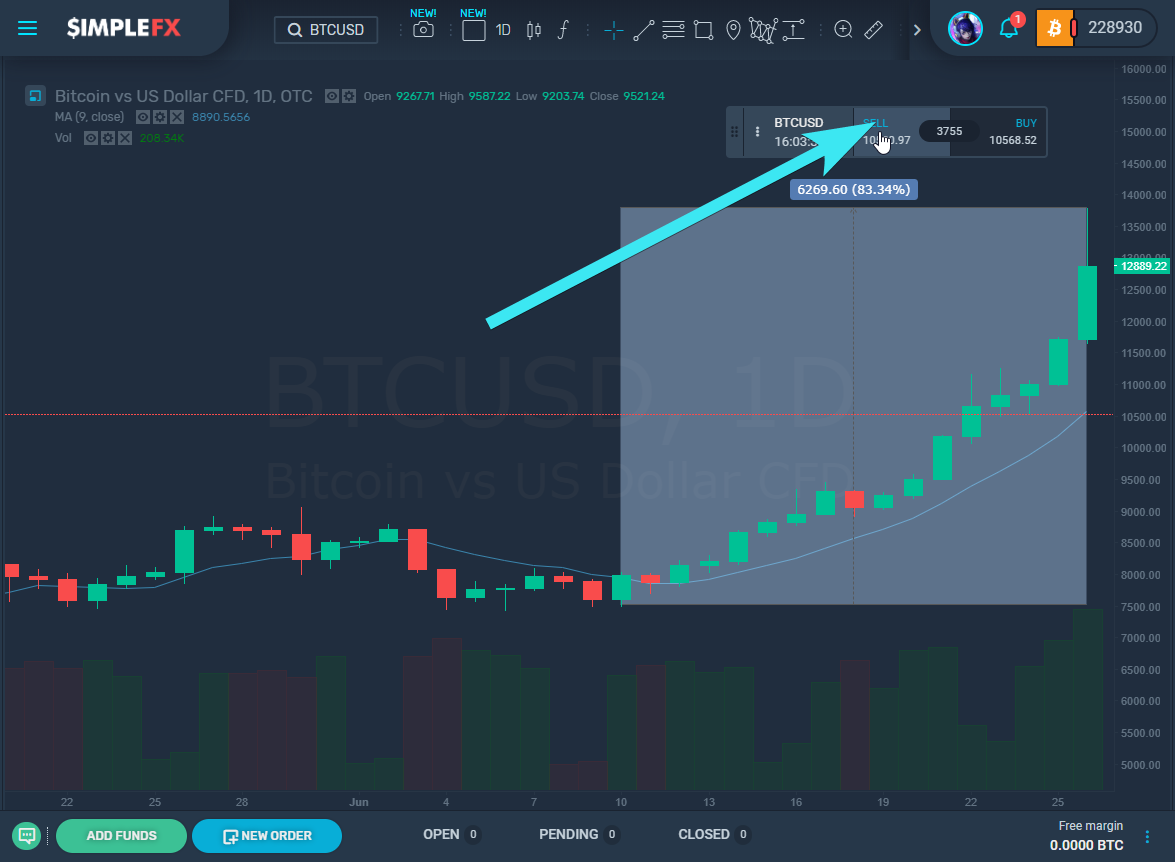 Just click the “Sell” button on your trading app. Then set the size of your order, but even more importantly, set the stop loss price. In case of short selling, it should be higher than the actual price you are selling an asset at. At the point from our example, one could set the stop loss at somewhere between $15,000 and $18,000. 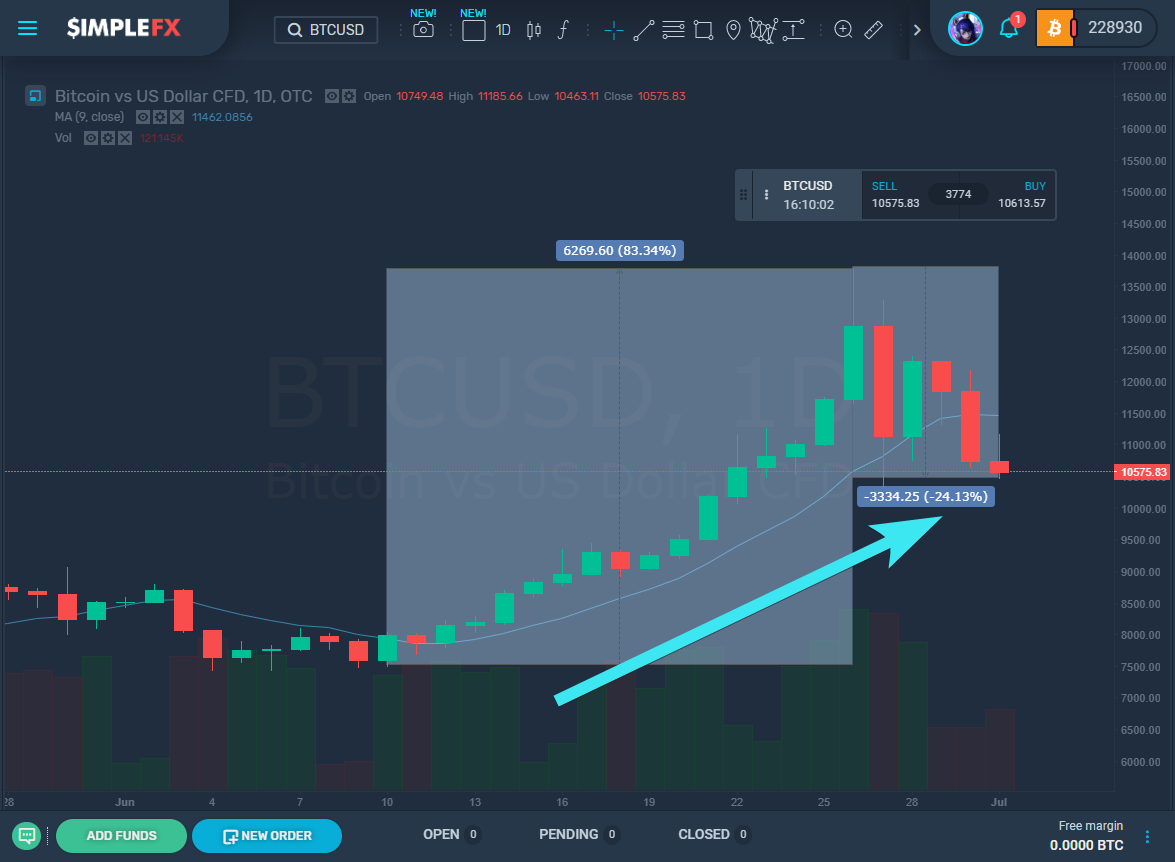 The Bitcoin believer, who had a long bullish position on crypto (mainly by holding the coins long term) managed to make a 24 percent profit in just five days.

The excellent point is that even if she or he was wrong, and the price would go up through the “stop loss” points it would be still worth it as the primary investment would increase its value. This is one of the hedging strategies every trader dealing with high volatility markets should use.

If you want to practice shorting stocks, Forex pairs or cryptocurrencies, SimpleFX WebTrader is the right app to start. It’s effortless to use, has a fully functional demo account and live accounts with no minimum deposits you can run in 22 different currencies.