Oil Price Keeps on Falling as the Demand Concerns Rise 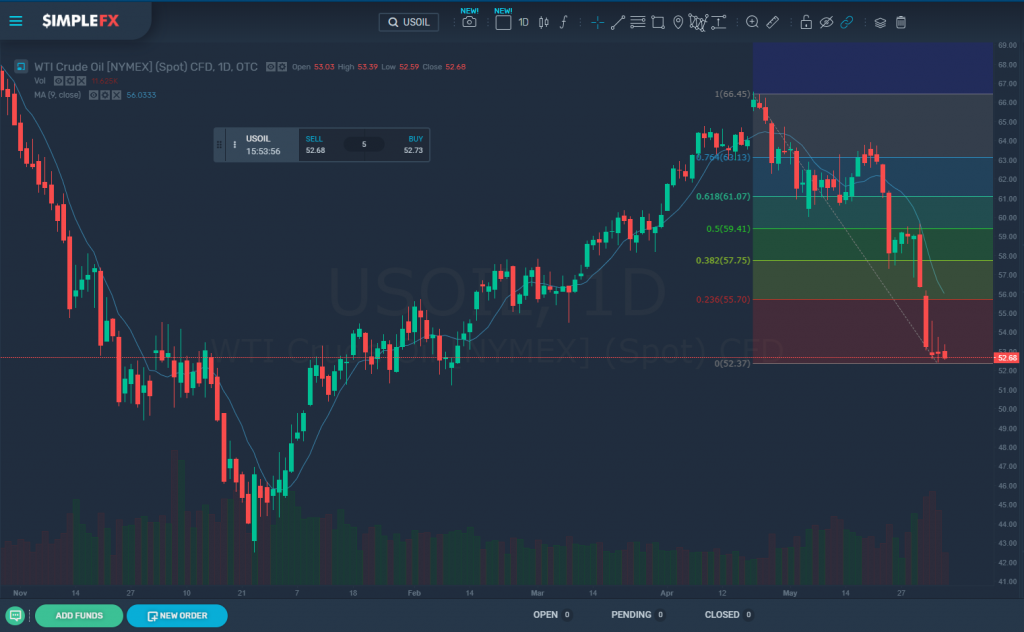 The same announcement is responsible for the rally in oil price, according to Andrew Lipow, the president of Lipow Oil Associates in Houston. Brent futures rose by 49 cents on Tuesday, to sell at $61.77 per barrel; the rise in value occurred at 12:16 p.m. EDT, which corresponds to (1616 GMT).  The global benchmark had earlier fallen to $60.21, which represented its lowest or weakest since January.

On the other hand, the U.S. West Texas Intermediate (WTI) crude rose in value by up to 17 cents, which translates to a 0.3% rise in value to sell at $53.42. Its increase in value represents a rise above one dollar since its session low.

Concerns about a decline in global growth, according to Russia’s top oil producer, had held down the oil market earlier this session. The oil producer threatened to oppose the extension of a joint cut in oil production agreement with OPEC until year end. The trade war between the United States and China, as well as the threat to Mexican imports by the USA,  had also contributed to the fall in the value of crude oil.

Ritterbusch and Associates’ Jim Ritterbusch noted that “As long as U.S. tariff issues with China and Mexico remain unresolved and a broad-based 5% tariff is placed on Mexico next week, speculative liquidation out of the oil space could be sustained.”

Oil futures are currently 20% lower than the peak for April 2019. The trading value in May was more moderate than previous records since November 2018.

Oil is not the only affected commodity, as gas and coal are equally negatively impacted by the factors mentioned earlier.

OPEC, in an attempt to prevent an oversupply of crude oil, had partnered with Russia to withhold crude supply since the beginning of the year.

Khaalid al-Falih, the Saudi Energy Minister, said on Monday that crude oil producers are reaching a consensus on how “to sustain market stability” in the second half of 2019.  However, Igor Sechin, the head of Rosneft, the Russian state producer, would have none of that as he charged Russia to produce oil at will and also threatened to seek compensation from the government if cut in crude supply is extended.

There is fear among producers that fuel consumption will reduce the consequences of the economic slowdown.  U.S oil production had been increasing following the pressure on oil price and effort to undermine OPEC’s effort.

The U.S increased its crude stockpile last month to the highest in two years. The American Petroleum Institute (API) is expected to release its data on Wednesday by 4:30 p.m.

Lipow said, “There is no shortage of crude oil inventories. Unless we see an across-the-board inventory drop, crude and product prices will remain under pressure.

GBPUSD at a Vurnelable $1.2 Level – Will it Fall Below or Rebound?