You are at:Home»News»Uber stock is looking for its market price after the disappointing IPO

Investment bankers at Morgan Stanley are set to get millions of dollars from fees after leading the public offering by Uber Technologies Inc. last week. Wealthy clients, however, face losses.

Back in 2016, Morgan Stanley allowed its elite clientele to take early advantage of Uber’s market listing as the investment bank raised private money for the ride-hailing company.

Friday saw the stock fall by over 7% on its starting point, which meant the early buyers, as well as everyday shareholders,  lost – for now, at least. On Monday in New York, shares fell even further by 8.3% at 0935. 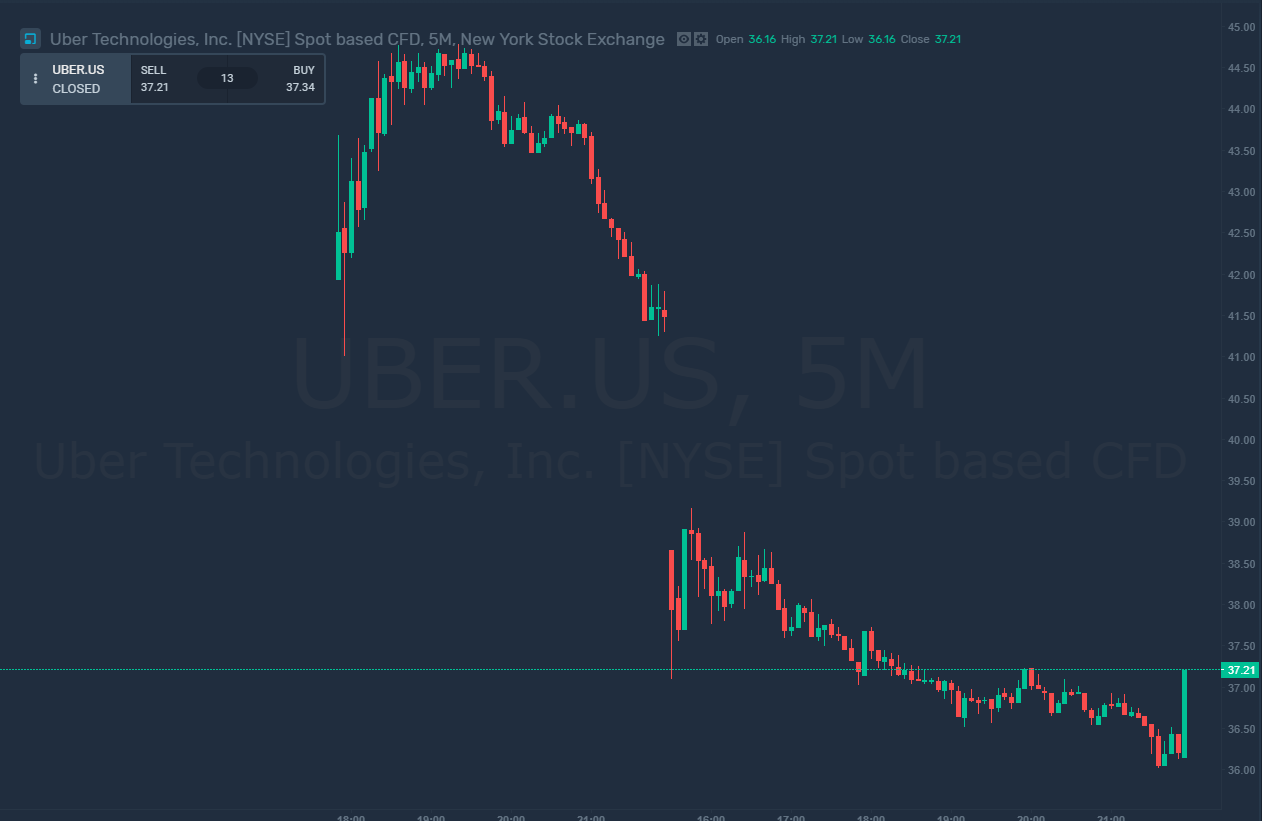 The Uber stock fell in the first two days of trading at NYSE. However, the Monday trading ended with a strong green candle (in a 5-minute chart)

A fund named New Riders LP offered wealth management clients the opportunity to invest in Uber. Morgan Stanley’s pitch offered share prices of $48.77, which would be holdings of Class A stock in the IPO. Documents showed the employees of Morgan Stanley were also able to invest under similar conditions.

The minimum investment amount was $250,000, and Morgan Stanley said that charges of up to 2% of the initial investment could be applied. Uber was valued at a ‘reasonable’ level of $62.5 billion, given the growth opportunities and competitive advantages of the company. Risk factors were listed as operating expense rises and loss years.

It remains unclear have much these wealthy customers or employees have contributed to this fundraising. Morgan Stanley declined to comment.

It could be that Friday’s debut is an anomaly. The decline of the stock to $41.57 has coincided in the morning with a broad selloff of stock, Lyft Inc.’s weak earnings report and the trade talk problems between China and the U.S. When the market opened on Monday, Lyft was expected to fall alongside Uber. Uber’s stocks fell to $37.17, a loss of 10% whereas Lyft only fell 5.3% to $48.35.

There is tension, therefore, as Morgan Stanley is leaning on its wealthy investors to supply more funding to companies in the Silicon Valley so that they have time to build up their businesses before they go public.

Uber’s IPO might now be put to the test depending on their wealthy clients’ reaction if things don’t go well.

Andy Saperstein leads the wealth management division and has helped clients place bets on the rise of startups from Silicon Valley. Dennis Lynch, the manager of the fund, was a part of Morgan Stanley’s earliest wagers on Twitter Inc. and Facebook Inc. before they were public. He also oversees the investment management division’s portfolios at the bank as well as having other funds with exposures to unicorns like Palantir Technologies Inc.

This prowess in linkups helped Morgan Stanley get mandates above other companies like Goldman Sachs. Morgan Stanley managed to be the first to be listed on the IPO.

Morgan Stanley’s clients now have to wait with bated breath and hope. They are prohibited from dumping shares in Uber for 180 after the offering.