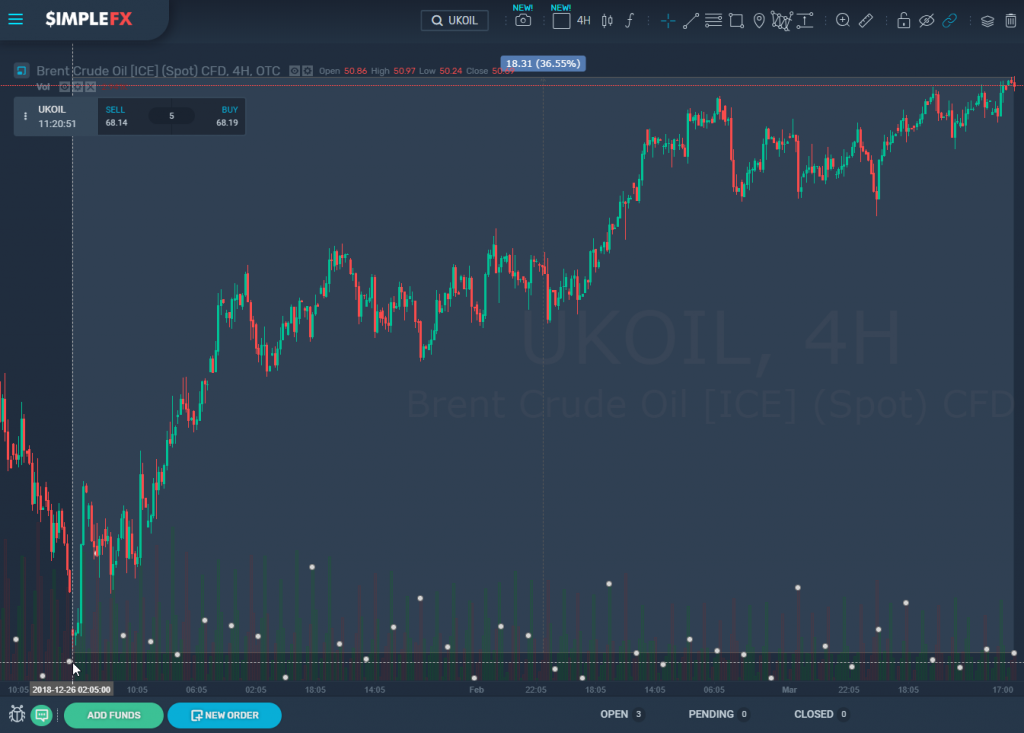 Prices of oil in the United States have spiked to $60 a barrel for the first time since November. This is mostly due to the Organization of the Petroleum Exporting Countries’ (OPEC) production cuts. The Saudi Arabian oil cartel, along with its Russian allies, made their production cuts as a response to the fact that America has now become the world’s largest oil producer meaning that there is an excess in the supply.

The prices rose in response to a drop in crude oil inventories. Stockpiles fell dramatically last week by over 9 and a half million barrels. Analysts had expected a rise of over 300,000 barrels. This is due to strong export and demand. Saudi Arabia has held back oil destined for the USA to convince traders that this production cut is effective. Stockpiles are now at their lowest in 3 months.

Besides, stockpiles of distillate and gasoline fell more than was expected too. The former fell by 4.6 million barrels and the latter, by 4.1 million barrels.

WTI (West Texas Intermediate) oil gained 1.3 percent and ended at $59.83 a barrel for its front-month crude futures contract. It rose to a high of $60.12, which is its highest price since November.

This year, crude oil prices have seen a rise of almost one third. This is partly owing to OPEC’s cutbacks but also due to the American embargo on Venezuelan oil.

The rise in oil prices has begun to have an impact on fuel prices. Regular gasoline prices rose to $2.55 per gallon. This is a rise of around 12% since the end of last year, according to the EIA.

Suhail Al Mazroui, the UAE’s energy minister, has said that he expects OPEC’s cooperation charter to be finalized with the non-OPEC partners this June. However, OPEC announced this week that next month’s meeting in which production cuts are to be discussed would be canceled. This means that the cuts are likely to remain in place for the near future at least.

Global markets have responded in concern of a fall in economic growth. The 8-month-long trade war between the US and China is an added worry. No one knows how soon this standoff will be resolved. Steven Mnuchin, the United States Secretary of the Treasury, intends to visit China in the coming week to talk to senior officials regarding trade.

Harry Tchilinguirian, a strategist for BNP Paribas, told Reuters Global Oil Forum that trade talks between the US and China “continue to present a binary risk for the oil market and other risky assets.”

An economic slowdown could also start affecting fuel consumption soon, which will, in turn, hold back more crude oil.

A Thomson Reuters/INSEAD survey found that Asian business confidence was nearly at its lowest for three years in the first quarter due to this ongoing U.S.-China trade war.