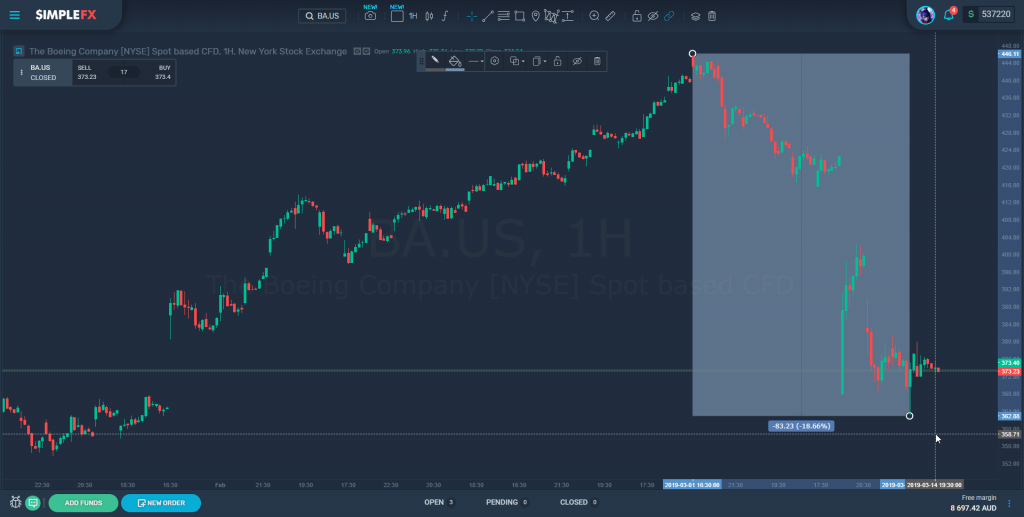 On Wednesday afternoon, President Trump announced that America was joining other countries across the world in grounding 737 Max airplanes in the USA with immediate effect. This caused Boeing shares to fall immediately by 3%. While this did rebound, Boeing’s stock is still 10% down since the Ethiopian air crash, equating to a loss of $25 billion on the company’s market value.

The Boeing 737 Max has been involved in two fatal air crashes of which there were no survivors. Investigations to the causes of both the Ethiopian air crash and the Indonesian air crash in October are still ongoing. Initial suggestions are that the pilots of both aircraft have struggled to control the plane in the lead up to each accident.

Boeing’s CEO Dennis Muilenburg supports the move to ground the 737 Max and added Boeing was doing everything it could to “understand the cause of the accidents in partnership with the investigators, deploy safety enhancements and help ensure this does not happen again.”

Links between the two crashes

The Federal Aviation Administration (FAA) claimed new evidence showed similarities between the Ethiopian Airlines crash and the Lion Air crash in October. The number of deaths between the two crashes totals 346, 189 of which occurred in the Lion Air flight. Both of the planes involved in these disasters were new planes that had only belonged to the airlines for a matter of months.

The effect on the markets

Airlines that have been using Boeing’s 737 Max in the US briefly saw a dip in their market value, but this was recovered quickly. The airlines affected (American Airlines, Southwest Airlines, and United Airlines) have 74 of these planes between them and have reassured their customers that they will be able to use other planes while the 737 Max is grounded. This shouldn’t be too much of a problem since this aircraft accounts for less than 3% of the fleet of each of the airlines.

It is expected that Boeing will be compensating the affected airlines. Boeing has been good in this respect in the past as it compensated airlines when its 787 Dreamliner jet was grounded for three months in 2013. The amounts awarded to airlines for this grounding were not disclosed. This was, however, at a time when there were only 50 787 Dreamliners in operations. The grounding of the 737 Max had affected more than 350 planes and many more airlines than when the Dreamliner was grounded.

Another airline affected by the 737 Max, Norwegian Air, has already stated that it would be billing Boeing for lost revenue. It is the first airline to announce that it is seeking compensation, but it is expected that other airlines will do the same. Norwegian Air has had to ground 18 737 Max 8 planes since the Ethiopian Airlines crash; they also had 100 more of these planes on order.