You are at:Home»Crypto Academy»Waiting for the Trend Reversal Many Turn to Cryptocurrency Staking

If you own Bitcoins or other altcoins and you are a long term investor, you don’t want to get rid of them now. The price is still searching for the bottom and unless the leading economies start to ban cryptocurrencies their fundamental value seems to be sound.

There is an additional incentive for holding to some cryptocurrencies – which is the interest they may produce. The practice of holding coins for steady return is called staking and it’s a way to earn passive income for many.

The tokens you keep in digital wallets may be used to validate blockchain transactions. Some cryptocurrencies, unlike Bitcoin, don’s use proof-of-work (PoW) method but proof-of-stake (PoS). People are rewarded for holding their currency in special wallets. 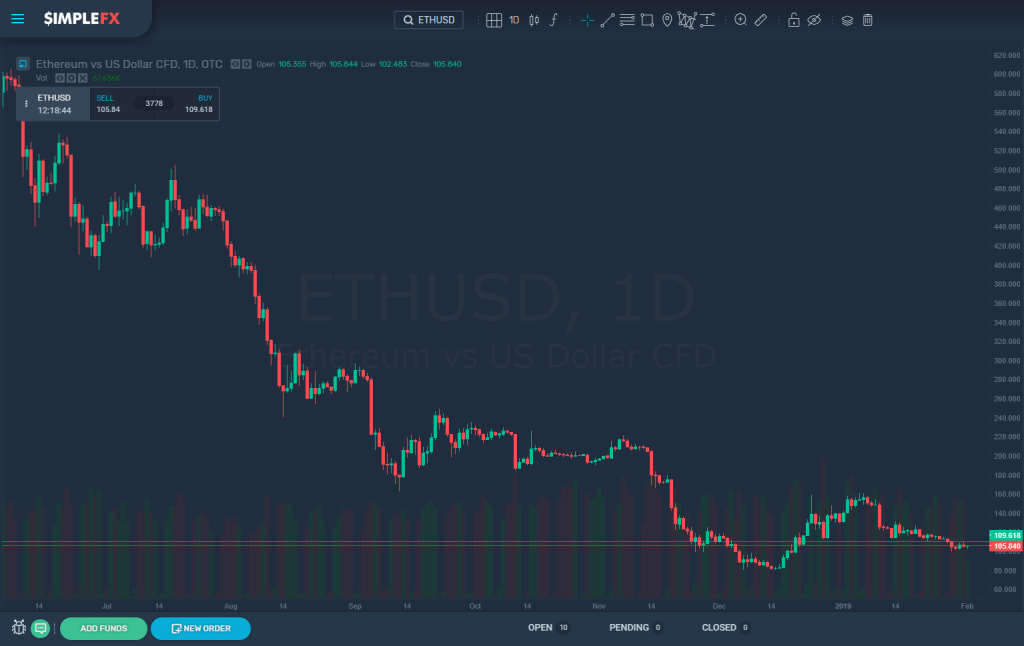 ETHUSD 1-day chart shows a continuation of a strong downtrend.

Ethereum, the third-largest cryptocurrency is, going to release a test PoS service for the investors. The coin plans to a software upgrade later this year that would shift from PoW to PoS method.

So far there are more than 100 digital coins using a proof-of-stake system. Staking rewards may range from 5 percent to 15 percent usually, but some currencies can give up to 150 percent annual return, depending on the amount held.

Staking coins is an alternative to mining. This method of validation works better during the downturn. Many companies and individuals have stopped mining Bitcoin and if the trend continues the security of some cryptocurrencies may be threatened.

Coins using staking such as Cosmos, Decred, EOS, Livepeer, and Tezos have gained some popularity during the downturn. There are also crypto custody companies that offer staking services, including staking-as-a-service.

On Thursday a blockchain investment fund Pantera Capital announced a $4.5 million seed round in Staked, a startup providing institutional investors with the technical infrastructure for non-custodial staking services. Anchorage launched on January 23., which launched on Jan. 23 and is backed by venture capitalist Andreessen Horowitz, offers coin custody and staking for institutional customers.

Staked coins are not liquid. Sometimes it takes days to release them for trading. That is why it is an energy efficient way of making money on cryptocurrency for investors that are tired of the price volatility, and want to quit or at least have a break in speculation.