You are at:Home»CFD Academy»UTXO – a Key Factor to Bitcoin Valuation Will Tell You Where’s the Bottom

Bitcoin and other cryptocurrencies are difficult to value. We are dealing with a possible digital substitute for money or gold. That’s why nobody knows where’s the bottom of the current downtrend.

One sure thing we know about Bitcoin is its supply. Unlike gold or fiat currencies, it’s limited at the cap of 21-million. That’s the design by Satoshi Nakamoto, and this information can be used to explore the market value of Bitcoin.

Researchers from Delphi Digital are using Unspent Transaction Output (UXTO) to estimate what is the bottom price for Bitcoin. Here’s the definition:

Without going into too much detail regarding how Bitcoin’s record keeping model functions, every transaction creates a new UTXO and the age of the UTXO indicates the block that it was first included in. In Layman’s terms, the UTXO age indicates the last time bitcoin was moved.

According to Delphi Digital, you can analyze Bitcoin’s aggregate UTXO age distribution over time and gain insight into buying and selling patterns. The researchers conclude as follows:

Here’s the UTXO percentage over the lifecycle of Bitcoin. 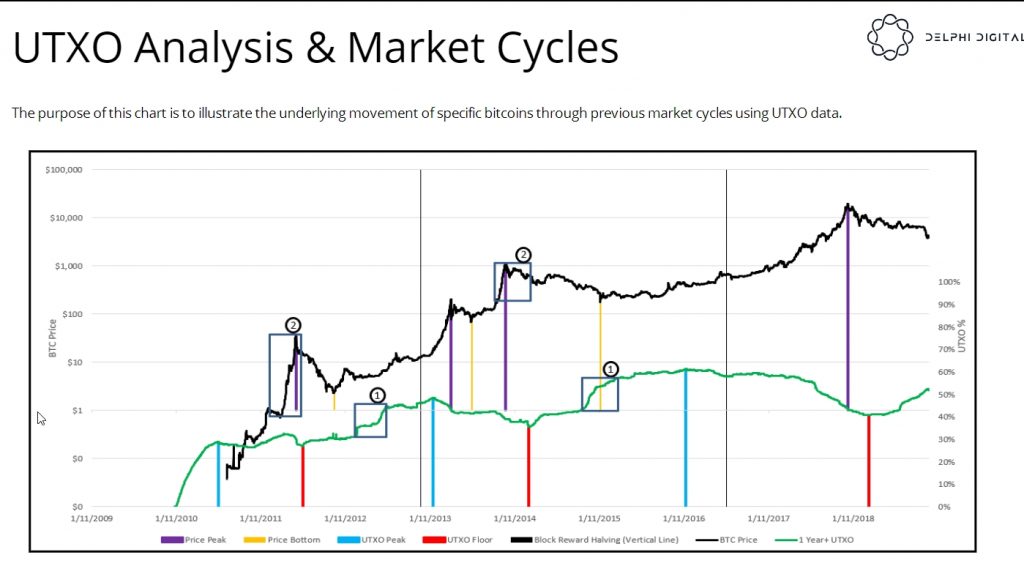 As you can see in 2017 the 1 year+ UXTO entered downtrend as the BTC price was growing. This shows how long-term holders started to take their profits.

In 2017 the 1 year+ UXTO started to decline once again, and the trend reversed in April 2018 the market accumulation returned. Take a look at the short paper to see how you could use this data for forecasting the Bitcoin.

Another interesting thing you can learn from UXTO is the number of “lost bitcoins”. The 5 year+ UXTO stands for the longest-term holders or the Bitcoins that have been lost. This may happen when the owner loses a private key or dies.

The indicator has been growing since 2014, and recently reached 20%, that is 4 million BTC that probably will never reenter the market.

Every news about potential limitations to the already capped BTC supply are signs for the Bitcoin price to go up. At what level will it happen? Nobody knows, but a deeper analysis of UTXO can prove to be useful in guessing the bottom out price for the recent BTC sell-off.