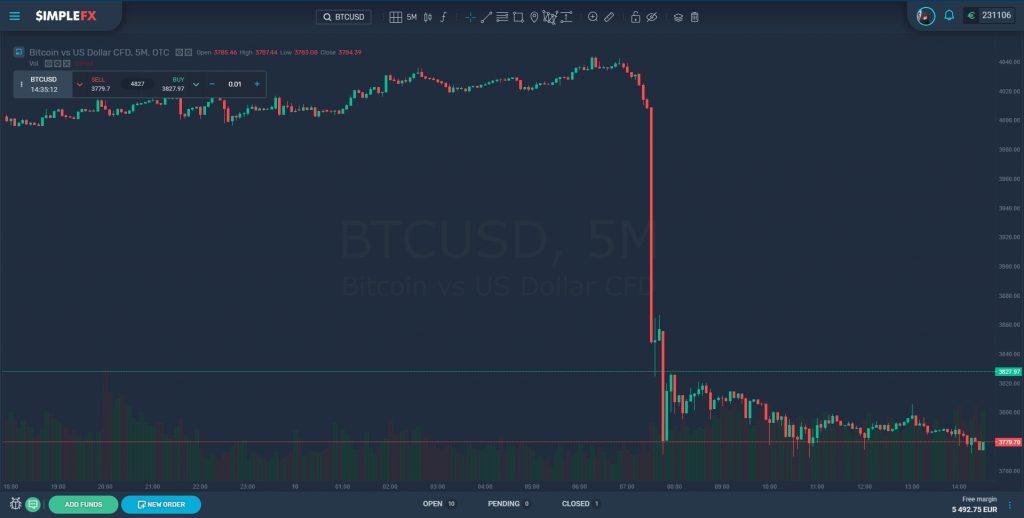 All cryptocurrencies fell sharply on Thursday as Bitcoin left the $4000 level it oscillated around for last days.

The 6.2 drops happened in the European morning. The Bloomberg Galaxy Crypto Index, a gauge of the largest cryptocurrencies, fell 7.7 percent as Bitcoin’s rival tokens, including Ether, Litecoin and XRP, also retreated.

Analysts warn that the sell-off may continue.

“It’s unlikely that the bottom is in for Bitcoin. I am certainly willing to change my mind, but the preponderance of evidence leads us to believe that we’ll see more lows before we head higher.” – Travis Kling, founder of the crypto hedge fund Ikigai told Bloomberg.

According to some, the cryptocurrencies are falling like dominos.

“Usually transfer of Ethereum onto an exchange indicates an intent to sell, and if there is a sell-off on one exchange it compounds like dominoes to another because arbitragers will sell immediately on the other exchanges as well,” said Timothy Tam, co-founder and CEO of CoinFi, a cryptocurrency research firm in Hong Kong in a message to Bloomberg.

Cryptocurrency has had a bad week as unknown perpetrators performed a 51 percent attack on Ethereum Classic. This is the common theoretical threat to cryptocurrencies. If more than a half computers supporting the encryption network work together to falsify the transactions written in the ledger. According to Coinbase Inc., one of the leading cryptocurrency exchanges, on Monday there were some signs of “deep reorganizations” of the Ethereum Classic blockchain, which may mean that some of the money has been spent twice.
bitcoin crash cryptocurrencies ethereum classic
Share. Facebook Twitter Pinterest LinkedIn Tumblr Email
Previous ArticleCanaan – One of China’s Leading Mining Hardware Manufacturers – Considers an IPO in the US
Next Article UTXO – a Key Factor to Bitcoin Valuation Will Tell You Where’s the Bottom

Downshifting – How to Win the Rat Race Without Even Joining It

How not to Lose Your Coins – Cryptocurrency Security Guide